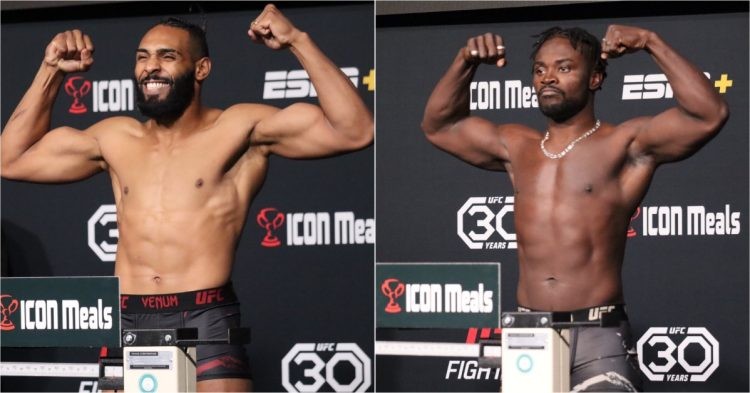 Claudio Ribeiro will fight Abdul Razak Alhassan in the prelims of UFC Vegas 67. The card promises to be an exciting one with fights like Sean Strickland vs Nassourdine Imavov and Dan Ige vs Damon Jackson. It is the first fight card of the new year, 2023, and the promotion is off to a solid start!

Abdul Razak Alhassan is a veteran fighter who joined the UFC in 2016. Although he was unbeaten at the time of joining the UFC, Alhassan has lost 5 fights since then. His recent form in the UFC is nothing to gloat about as he has lost 4 of his last 5 fights. Hence, there is every chance that Alhassan’s job depends on the result of this fight.

The UFC certainly isn’t doing Abdul Razak Alhassan any favors with the match-up either. Abdul Razak will be fighting Claudio Ribeiro, who is fresh off a win against Ivan Valenzuela at Dana White‘s Contender Series in August 2022. Alhassan, on the other hand, lost his last bout against Joaquin Buckley via a split decision.

Can Alhassan get back to winning ways against Ribeiro?

The fight is pretty much between the old blood and the new. While Claudio Ribeiro is an exciting fighter with a 100% finishing record, Abdul Razak Alhassan has been struggling as of late. His losses against Khaos Williams and Jacob Malkoun really affected his career a lot. Hence the onus is on him to turn his career back around.

A look at Alhassan’s striking stats would paint the whole picture of his struggles. Abdul Razak Alhassan absorbs 4.06 strikes per minute while landing only 3.57. Hence, the 37-year-old needs to tighten up his stand-up a lot to survive against Claudio Ribeiro. The Brazilian has 10 wins in his career, all via knockout.

The 30-year-old old also has a great chin as he has never been knocked out in his career. But, he does have a submission loss on his record. That is where Abdul Razak Alhassan can excel. Alhassan averages 1.04 takedowns per fight. Although Alhassan is an amazing striker himself, grappling would be his best way of winning.

However, he needs to survive the heat that Claudio Ribeiro will bring in the first round. Ribeiro has 8 first-round finishes in his career so far. If their recent records are anything to go by, the Sao Paolo native is set to start his main roster journey with a big win.