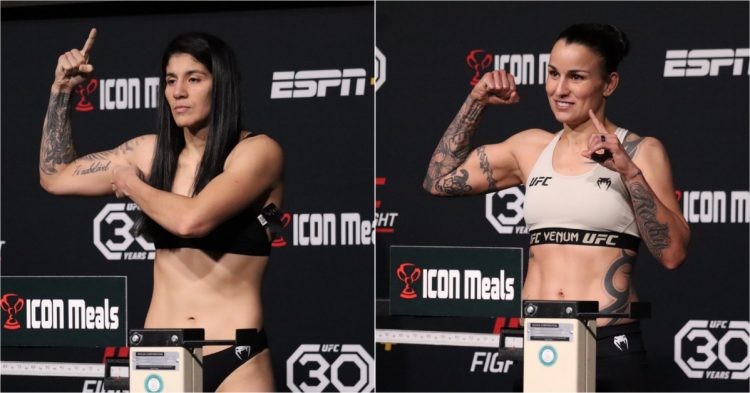 Ketlen Vieira returns to action this weekend at UFC Vegas 67. The card is set to feature Sean Strickland vs Nassourdine Imavov in the main event. While the two usually fight at middleweight, the last-minute replacement of Kelvin Gastelum pushed the bout to light heavyweight. The main card features 5 fights and one of those would be between Ketlen and Raquel Pennington.

In her last fight, Ketlen Vieira beat Holly Holm on May 21, 2022. The bout was an extremely close one. Holm was in the fight until the very last second. However, Vieira managed to edge out a win via a split decision. But, She has taken a long layoff after that. Now, she finally returns to the Octagon and against a credible opponent in Raquel Pennington.

Raquel Pennington’s last fight was a month before Ketlen’s last outing in the Octagon! Pennington has been on a great run as of late. After her last loss against Holly Holm at UFC 246, Rocky has turned her career around in a massive way. She remained unbeaten in the last 4 bouts and has beaten the likes of Aspen Ladd, Pannie Kianzad, and Macy Chiasson.

So who wins the women’s bantamweight fight this weekend? Let’s look at the stats between the two and find out!

UFC President Dana White once accused Raquel Pennington of not being able to let go of her hands. The bout against Holly Holm was the perfect example of it as Pennington went into a shell. Although she has not been able to secure a ton of KO finishes, Rocky has gone on to string up quite a few wins. She is also a great defensive fighter and has only 1 KO and submission loss each.

But, Ketlen Vieira is certainly a powerful fighter herself. While Vieira has only 2 knockouts in her entire career, she has put fighters in trouble with her striking. Vieira also has a KO loss in her career and it came against Irene Aldana at UFC 245. However, Vieira is mostly known for her ground game. The Brazilian fighter has 2 KO wins and 4 submissions in her career.

No fighter in her career has submitted Ketlen Vieira yet. On the other hand, Rocky Pennington was submitted by Cat Zingano in 2012. Hence Vieira has to be the favorite because of her ground credentials. On top of that, Ketlen is almost 3-years younger than Pennington.

Vieira is ranked 2nd in the women’s bantamweight division at the moment and one more win can secure her a title shot. Hence, it does appear that Kelten Vieira would be the favorite to win.