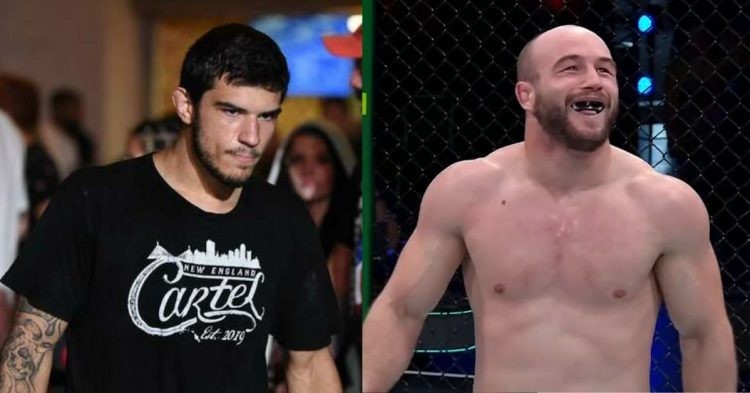 The UFC Vegas 67 card saw some huge changes made to it. The main event fight between Kelvin Gastelum and Nassourdine Imavov had to be scrapped just days ahead of the event. Sean Strickland had to be called up as a late replacement after Gastelum withdrew due to injury. Another match in the same event that had to pull through similar circumstances was Mateusz Rebecki vs Nick Fiore.

This match sees both its competitors making their UFC debut. Rebecki (16-1) fought on Dana White’s Contender Series and this is how he landed a UFC contract. With current UFC stars like Sean O’Malley and Kevin Holland taking the same route to the octagon, Rebecki finds himself in elite company. Mateusz Rebecki tapped out Rodrigo Lidio on week 6 of DWCS’ sixth season.

Rebecki’s opponent, on the other hand, holds a 4 fight-winning streak in Combat Zone. He recently stopped Stephen Stengel in the first round via punches.

Rebecki vs Fiore: who will win their UFC debut?

As mentioned prior, this bout faced circumstances similar to the main event. Mateusz Rebecki’s original opponent had to pull out. This means Fiore is taking the fight on short notice. This gives Rebecki a slight edge. However, his opponent will have the size and strength advantage on the night.

Mateusz Rebecki is a tremendous wrestler, an expert at taking down his opponents. The Polish fighter is somewhat undersized for the division at only 5’7″ with a 66-inch reach. However, he frequently pushes forward in order to pressure his opponent. He is also quite adept at striking, using it to set up his takedown.

Nick Fiore is an exceptional grappler with 4 of his 6 pro-MMA wins ending in a submission. And many of his wins have come in the first round. Fiore’s striking isn’t the best. However, Rebecki’s tendency to rush into takedowns and Fiore’s height and reach advantage will somehow compensate. Fiore isn’t the best wrestler, not very proficient with his takedowns.

This fight seems to heavily favor Mateusz Rebecki. This holds true despite Fiore having the height advantage. Mateusz Rebecki is a fantastic wrestler with good striking and great cardio. His pressure and output can overwhelm opponents.

He has also fought more and better opponents than Nick Fiore, who despite being undefeated, has only fought in 6 MMA bouts compared to Rebecki’s 17. With all these factors, combined with Fiore being a late replacement, the writing on the wall is clear. Mateusz Rebecki’s wrestling and pressure will likely be too much for Nick Fiore to handle at UFC Vegas 67.