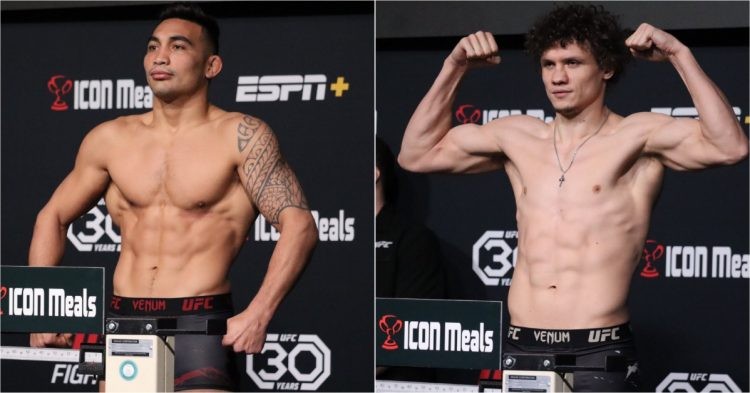 UFC Vegas 67 is going to be the first event for the promotion in 2023. The event has two middleweight fighters Sean Strickland and Nassourdine Imavov fighting at light heavyweight. The card also features two other middleweights in the form of Punahele Soriano and Roman Kopylov. It is just one of the many exciting fights on the card.

Russian fighter Roman Kopylov came into the UFC in 2019. However, the fighter has had just 3 fights since joining the promotion. He lost both of his first two bouts against Karl Roberson and Albert Duraev. However, Roman got in the win column in September 2022 against Alessio Di Chirico. So the bout against Punahele Soriano will be an opportunity to build upon his first win.

Punahele Soriano also joined the UFC in 2019 when he beat Jamie Pickett at Dana White‘s Contender Series. Since then Soriano has a 3-2 record in the promotion. However, he was unbeaten before his back-to-back losses against Brendan Allen and Nick Maximov. But, much like his next opponent Roman Kopylov, Soriano is also coming off a win in his last fight.

So who comes out on top in a bout between two rejuvenated middleweight fighters? Let’s find out!

Can Kopylov knock out Soriano at UFC Vegas 67?

Roman Kopylov has 8 knockout wins in his career, while Punahele Soriano has 6 KO wins. So all the stats point toward an exciting brawl. Both Roman and Punahele have the power to sever each other from consciousness. So there is a big chance for both fighter to finish the fight early.

Neither fighter has suffered a knockout loss in their respective careers. While Punahele lands 3.95 strikes per minute, Kopylov lands 3.44 strikes at the same time. So it just shows both fighters wait for their opportunity to land big punches instead of relying on volume punching. But Soriano lands 1.02 takedowns per fight while Roman only averages 0.37.

So Punahele Soriano should be the favorite to win the contest. While both are prone to getting involved in brawls, the 30-year-old can make the fight easier for himself by implementing more grappling in the bout.