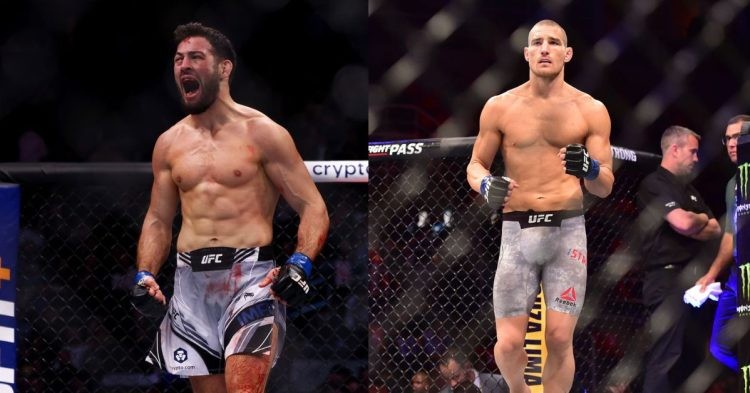 Stepping in on short notice!

Sean Strickland (25-5) poses quite a different challenge to Imavov compared to Gastelum. For starters, Strickland is ranked #7 in the UFC’s middleweight rankings. He was considered a legitimate title challenger even as recently as UFC 276.

But the brutal knockout he suffered at the hands of Alex Pereira hurt his stock. Strickland also went 5 rounds with another dangerous fighter in Jared Canonnier in the final card of 2022. However, Sean would end up losing to Cannonier in a very closely contested bout.

Whereas, Nassourdine Imavov (12-3) is currently riding a 3-fight win streak in the UFC. He recently had his most high-profile win as he beat Joaquin Buckley via unanimous decision. At only 26, Imavov is one of the brightest prospects in the UFC’s middleweight division. His ranking of #12 will only rise as he gets better with each fight. However, in his way stands a real problem in the form of Sean Strickland.

Imavov is quite well-rounded with a diverse arsenal. He also has a good ground game with 4 submission victories in his MMA career. What is really impressive about Imavov is the fact that 9 of his 12 victories ended in a finish. And at only 26 years old, he is yet to fully mature as a mixed martial artist.

Nassourdine Imavov is not short on momentum with 3 wins in his last 3 fights. However, one thing that concerns fans is Imavov’s gas tank. He is known to burn out and fade a little during the championship rounds.

On the other hand, Sean Strickland finds himself in a weird spot. He goes into this fight with nothing to lose and everything to gain, as is typical with late replacements. Strickland is 0-2 in his last 2 fights. Those losses came against two of the very best in the division, Jared Canonnier and Alex Pereira, the UFC middleweight champion. Strickland’s slick, technical style will be harder to counter for Imavov compared to Kelvin Gastelum.

Gastelum is a fighter who throws bombs hoping one of them will put down his opponent. However, Strickland is a different beast when it comes to striking. He uses the jab extremely well and is an expert at pressuring his opponents. This could prove to be a problem for Imavov with his aforementioned conditioning issues.

Who will be the winner at UFC Vegas 67: Sean Strickland vs Nassourdine Imavov?

Both fighters are well-rounded mixed martial artists. However, Strickland edges out Imavov in the striking department. He also presents a huge step up in competition for Imavov, even when compared to Kelvin Gastelum. Sean Strickland has beaten several top contenders and faced former and current UFC champions in his career.

Another huge factor that may help determine the winner is the weight class. This fight will be fought at light heavyweight and not at middleweight. This will likely favor Strickland as he will find it easier to go 5 rounds. However, as Imavov clarified, he doesn’t feel this will be a problem for him.

Imavov will definitely need to finish Strickland to win. Attempting to keep up with the American’s volume will likely end badly for the “Sniper.” All things considered, this fight seems to favor Strickland. Not only is he more experienced and a better striker, but, the 205lbs weight class will definitely help him take the fight to Imavov. Ultimately, this fight is Sean Strickland’s to lose.