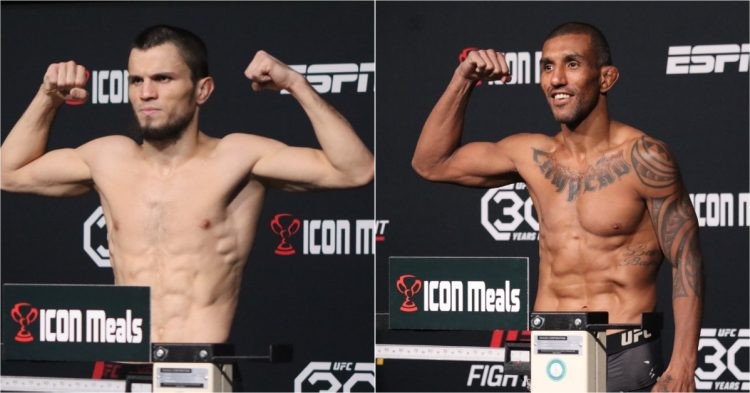 UFC will hold the very first card of 2023, UFC Vegas 67, at the Apex building in Las Vegas. The card was originally supposed to have Kelvin Gastelum vs Nassourdine Imavov in the main event. However, an injury to Gastelum led to controversial middleweight, Sean Strickland replacing him in the fight. But, the main card kicks off with Umar Nurmagomedov vs Raoni Barcelos.

While Islam Makhachev is carrying Khabib Nurmagomedov’s legacy at lightweight, Umar Nurmagomedov is quietly building up a winning streak at bantamweight. The fighter has been exceptional since joining the promotion in 2021. He has beaten Sergey Morozov, Brain Kelleher, and Nate Maness. With 2 submissions and 1 decision win, Nurmagomedov is moving up the ranks.

He is currently ranked 11th in the 135lbs division. However, for his bout this weekend, Umar will take on unranked fighter Raoni Barcelos. While Umar has seemed unstoppable, Barcelos has been quite the opposite. In his last 3 bouts, Raoni has lost 2 of them against Timur Valiev and Victor Henry. But in all fairness to him, Barcelos won 5 fights in a row before his loss to Valiev.

So how will Raoni Barcelos fair against Umar Nurmagomedov in a bantamweight bout this weekend? Let’s find out!

Can Nurmagomedov continue his unbeaten run against Barcelos?

A lot of fighters in the UFC have good to great Brazilian Jiu-Jitsu skills. But very few are perhaps elite and Raoni Barcelos is one of them. Despite holding a great skill advantage over all his opponents on the mat, Barcelos has 8 knockouts and only 2 submissions. So stylistically, Umar vs Raoni is a great match-up. Both are great grapplers and good strikers.

Umar has 1 knockout and 7 submission wins in his career. But, Umar Numragomedov is not afraid to strike against his opponents. It will be an extremely potent tool as Umar may not want to tangle with Barcelos’ immense BJJ skills. So let’s take a look at the striking stats for both fighters. As per UFC Stats, Umar lands 4.35 strikes per minute while absorbing only 0.37 strikes at the same time!

So Barcelos will do extremely well to land anything meaningful on Umar. But Raoni does have an average of landing 5.82 strikes per minute and absorbs 4.94 strikes. While Raoni has 3 losses that include 2 decision losses and 1 submission loss, his chin hasn’t been cracked yet. Umar, on the other hand, is undefeated. So it might indicate a striking battle this Saturday.

There is no doubt that Umar Nurmagomedov will have a big advantage over Raoni Barcelos. Umar is much younger, more aggressive, and has better confidence. The Dagestani fighter also has the height and the reach advantage over the Brazilian. So fans can expect Umar to retain his unbeaten status.