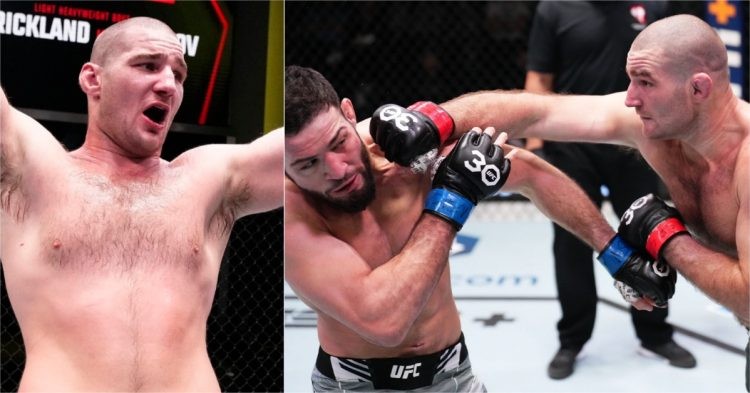 Sean Strickland just proved why he is such a fan favorite. While his statements are often controversial, Sean does not back down from a fight. He just replaced Kelvin Gastelum on very short notice and fought French fighter Nassourdine Imavov in a five-round fight. However, was it the right idea for him to come back so soon? Let’s find out.

Nassourdine Imavov did his homework ahead of the short-notice fight. Strickland does not have the best head movement. Hence, Imavov attacked with some big overhead strikes early on. He was successful in doing so in the first half of round 1. However, Strickland had enough and started to land some haymakers of his own. The blood and the bruises on their face showed just how much power both men had.

This one's gonna be fun – Sean Strickland & @Imavov1 are ready to close out #UFCVegas67 🍿 pic.twitter.com/9jVlKJbuKu

The 27-year-old Frenchman did seem out of breath at the end of the first round. It is important to note that the bout took place at light heavyweight. Hence, neither fighter had to dehydrate excessively. It did give both a much-improved cardio. The fighters took full advantage of it and pushed themselves to the limit.

In real-time, it was hard to give any fighter the advantage as both did some significant damage to each other. But Strickland did manage to secure a takedown in the second round. Even in round 3, the action did not slow down at all. While both had power, Imavov was in better shape and was much quicker. But, Strickland did a great job in frustrating Nassourdine.

Although Sean’s chin was quite high, Imavov just could not seem to replicate what Alex Pereira did at UFC 276. As Imavov was trying to figure out his next offensive move, Strickland was peppering him with punches. By the end of the third round, it did seem like Strickland was taking over the contest. As Nassourdine never had a 5-round contest, Sean did seem to have an advantage.

The desperation was quite evident in Imavov’s approach in the final rounds. But Strickland showed his experience and weathered the early storm expertly. Although he did not manage to put Imavov away in round 4, Sean did have a dominating performance. Between the fourth and the fifth round, Imavov’s coaches let him know that he needed to secure a stoppage to win the bout.

But Strickland‘s experience once again helped him as he slowed things down in the initial minutes of the final round by engaging in clinches. Strickland knew he was in an advantageous position heading into the final round. Hence Sean tied Imavov up in clinches and slowly sucked all the life out of the bout. However, Sean showed his wild side as he swung for the fences in the final few seconds of the bout.

Sean Strickland kicks off his 2023 with the main event victory 💪 pic.twitter.com/fQ9msJ7f6C

Sean Strickland ultimately won the bout via the judges’ decision. The three judges scored the bout 49-46, 49-46, and 48-47. Although he had a great performance, Sean Strickland was not too pleased and added that he “fought like b***h.”

After the bout, Sean immediately went upto one of the judges and said something to them which was inaudible. However, he elaborated on it in his post-fight interview.

He added, “it was a close fight with Jared, but I won. I beat the second-third ranked guy. I’m only here because of bad judging.” Strickland was hinting toward his controversial loss to Jared Cannonier in the last fight card of 2022.

So who do you want to see Strickland fight next? Let us know in the comments down below.