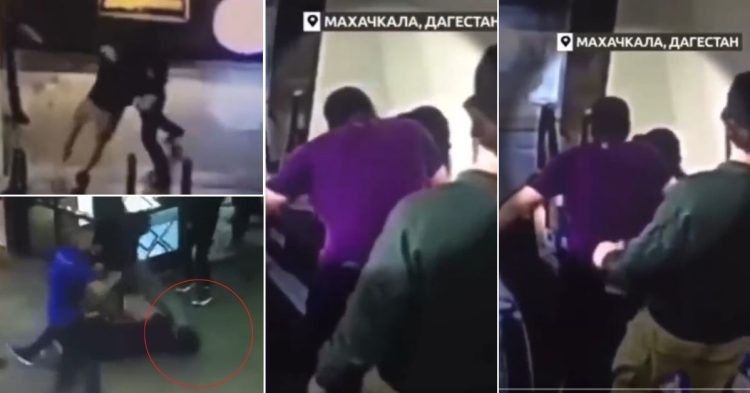 Sharaputdin Magomedov has captured all kinds of media attention since signing with the Ultimate Fighting Championship. The Russian fighter, hailing from Khabib Nurmagomedov’s hometown of Makhakhchala, Dagestan, has been making rounds on the internet owing to a viral video.

In the video, Sharaputdin Magomedov can be seen confronting a stranger he encounters on the escalator for kissing in public. It is during this verbal exchange, the individual opposite Magomedov attacks him, prompting an ugly brawl from both sides. The incident happened in a Dagestani mall, where apparently such behavior is forbidden.

“One has to understand the situation, in Makhachkala there are unwritten rules, a kind of moral code of our own,” he said (via Sport1). “In Moscow it is acceptable [to show affection in public], but with us it is not acceptable. I could not shut up”. Sharaputdin Magomedov said about the incident.

Looks like he was assaulted and acted in self defense . No question

In that part of the world, you do not do that publicly. Stop crying.

Shocked at the sudden mayhem, onlookers try to split both of them apart. However, that’s not the end of it. Magomedov then later waits for him outside of the mall, and attacks him once again, even stomping his head after knocking him down on the floor.

How is this person not in jail?

Fans had a mixed reaction to the incident, and while a lot many came out in support of Sharaputdin, others were not too impressed with how the Russian fighter carried himself after the brawl. According to reports, he was charged with hooliganism and disturbing public order for his part in this incident.

Sharaputdin Magomedov, nicknamed, Shara Bullet, recently made headlines after he signed a multi-fight deal with the UFC. Having competed in the welterweight, middleweight, and also light-heavyweight divisions, Sharaputdin Magomedov is seen as a legitimate threat inside the UFC Octagon.

Magoemdov’s MMA record stands undisputed, with Tapology listing him at 16-0, while Sherdog has him listed at 11-0. ESPN journalist Brett Okamoto called him a mixed martial artist with a record of 17-0. Regardless of the numbers in front of his name, one thing is clear, Sharaputdin has never lost in his mixed martial arts career, and boasts an incredible knockout power.