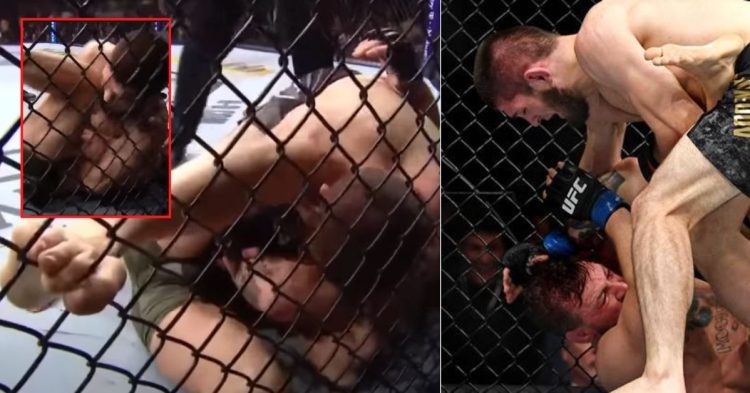 Conor McGregor has been repeatedly called out for his illegal moves during the grudge match against Khabib Nurmagomedov back at UFC 229. The biggest PPV in the history of the UFC, the rivalry between McGregor and Nurmagomedov lives on even after four years since they shared the cage.

Once again, Conor McGregor seemingly took pride in the fact that he landed an illegal knee on Khabib Nurmagomedov. Calling it a “never before seen shot”, the Notorious went a step further and mocked Joe Rogan for his commentary during the fight. This is not the first time that McGregor has admitted and admired the illegal shot. Back in 2020, McGregor had called the execution of his shot a “beauty”.

The knee into the eye socket was illegal yes, from this position. A beauty tho. Never before seen shot. Like many of my shots.
I use the mount defence leg as a spring board, loading the knee below it. Release and straight to the eye socket. Smashed it in! @joerogan. Hey Dana 😂 pic.twitter.com/qZAcbbuIHS

Watch the illegal shot Conor McGregor landed on Khabib Nurmagomedov during the second round of their fight at UFC 229. McGregor engaged in several other illegal acts during the fight including grabbing the cage and grabbing the gloves.

I call this knee strike “the springbok” Remember reebok? Ye well this is springbok. You ever see a springbok jump? Well just have a look at that knee springbok into this eye sock hahahaja I’m the goat of unseen shots.
That’s without question.
God bless the dead. https://t.co/usFrX7lUe7

In a series of tweets, McGregor hit back at Nurmagomedov in what fans are calling a “desperate” attempt by the Notorious even after four years after losing to the Eagle.

Conor McGregor wants to fight Khabib Nurmagomedov in a rematch

Earlier, Khabib Nurmagomedov mocked Conor McGregor, who announced early in his career that the Irish fighters are not here to take part but to take over.

Soon after, McGregor hit back at Nurmagomedov and demanded a rematch against the former lightweight champion. It goes without saying, Khabib retired from mixed martial arts and has shut any possibility of making a return to the Octagon.

McGregor argued that Khabib is scared of defeat, and hasn’t truly fulfilled his father’s promise. Abdulmanap Nurmagomedov’s comments regarding watching his son retire with a perfect 30-0 record did not come to be after Khabib announced his retirement back at UFC 254 following a second-round submission win over Justin Gaethje.

When will McGregor return to the Octagon?

Conor McGregor has revealed that he will get back into the USADA pool coming February, announcing his return to the UFC Octagon. According to his latest tweet, McGregor now has no interest in fighting Khabib Nurmagomedov. Regardless, it won’t be wrong to say that McGregor vs Nurmagomedov 2 might never take place.

There is a list of options for McGregor whenever he decides to step inside the UFC Octagon. The Notorious has revealed he wants to make his return to the UFC’s welterweight division. Meanwhile, Michael Chandler has also put his name forward for a huge fight against the Notorious at the 170 lbs division.

The fourth fight against Dustin Poirier, and fresh blood in the form of Charles Oliveira and Justin Gaethje are also exciting options.