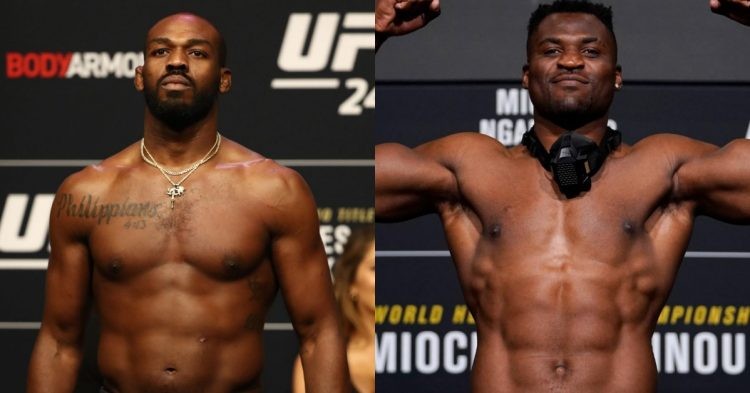 Jon Jones vs Francis Ngannou is in works. (Images via Twitter)

It looks like the UFC is trying to book the heavyweight champ Francis Ngannou against Jon Jones instead of Stipe Miocic. There were rumours that Stipe was leading the race to be Jones’ first opponent in the heavyweight decision. An interim title was also in discussion for Jon’s fight against Miocic.

However, it appears as if the UFC is looking to go in a different direction, as reports suggest that Francis Ngannou, may just be the opponent to welcome Jon to the heavyweight division. The report comes from Combatalk and they state Ariel Helwani as their source. According to the report, the company wants to book Jonny Bones vs The Predator at UFC 282 on December 12th.

But there are apprehensions about the fight taking place as Ngannou is still injured. Ahead of his last fight at UFC 270, the heavyweight champ suffered a major knee injury which required reconstructive surgeries. Hence, the notion was that Francis will not be fighting for the rest of the year. However, he recently stated that there is a possibility of him coming back late this year.

So the question becomes, why is the UFC moving away from putting Jon against Stipe? The report implies that the UFC is not confident about Jon’s chances of beating Miocic. The former light heavyweight champ did not have the most convincing wins in his last two fights. On top of that, his 2-year absence is not helping the matter either.

Another reason as to why the UFC wants Jon vs Francis next may just be the uncertainty regarding Ngannou’s contract situation. The promotion is unsure if Ngannou will renew his contract or not. So UFC does not want to miss the chance of putting Jones up against Francis in a super fight.

Will Francis Ngannou re-sign with the UFC?

As the fans know, Francis Ngannou is not happy with the amount of money he is making in the UFC. There was a lot of tension between the company and the fighter ahead of UFC 270. Ngannou repeatedly bashed the UFC for not paying their fighters enough. The issue was so severe that UFC President Dana White was not present in the Octagon to wrap the belt around Francis’ waist after UFC 270.

After the event, Ngannou revealed that he will not continue with the UFC if he does not feel as if he is being compensated well enough. He even went back and forth with boxing heavyweight champ Tyson Fury after his win over Ciryl Gane. They agreed to fight in a special rules combat event. So, Francis certainly has other options outside the UFC.

Do you think Jon Jones will fight Francis Ngannou for the UFC belt on his heavyweight debut? If he does, who do you think will win in a battle between the two behemoths? Let us know in the comments down below.