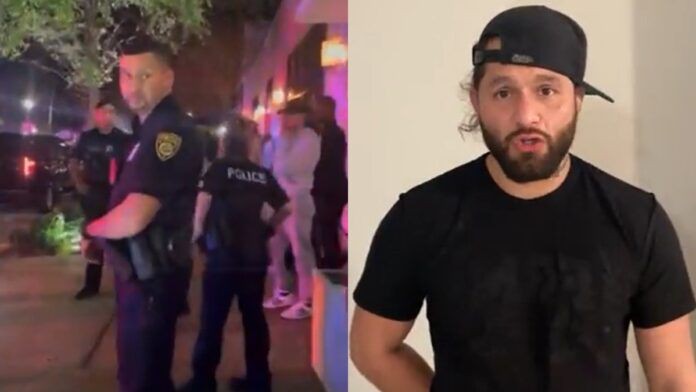 Former teammates turned rivals, Jorge Masvidal and Colby Covington got into a physical altercation at a restaurant in Miami Beach, Florida.

So far multiple reports have come out that have shared fascinating details about this altercation. As per the police report, Jorge Masvidal disguised himself wearing a surgical mask and hoodie. He then sucker-punched Colby Covington twice, fracturing Covington’s tooth.

It is also very likely that Masvidal will face a felony arrest after the necessary investigation.

A video of Covington and Masvidal arguing outside the restaurant surfaced on the internet. But, that does not reveal exactly what went down between these two UFC welterweights.

However, Colby Covington can be seen talking to Nelk Boy’s Bob Menery after the brawl at the restaurant. Covington is seen in the video asking Bob Menery “How would he know I am here”.

Covington also said, “He was over here swinging trying to come at me I and I ran out here”.

The fans are speculating that Masvidal found out the whereabouts of Colby Covington from the stories of Nelk Boys as Malki Kawa thanked the Nelk Boys on Twitter. However, Menery dismissed the accusations and stated on his Instagram: “Colby Covington did nothing but treat us with respect. We did as well. Things happen. Ruined the night. S**ks.”

So far, Colby Covington has not issued any statement following the brawl. However, Jorge Masvidal made sure to send Covington a message after last night’s altercation.

Masvidal explained his actions and tweeted: “good morning to everyone except those that think talking about someone’s kids is cool”. He also challenged Colby Covington to show his face after the altercation.

This is certainly not a good look for Jorge Masvidal, who recently fought a five-round main event fight against Colby Covington at UFC 272. Covington dominated Masvidal for five rounds to pick up a unanimous decision win. However, Masvidal did warn Covington saying that he would fight him outside the cage.

It should be considered that this is not the first time, Jorge Masvidal has attacked another UFC fighter outside the octagon. In 2019, Masvidal and Edwards got into a physical altercation after a UFC Fight Night in London. As a result of that fight, Leon Edwards suffered a cut on his face. Though Masvidal did not face any charges for his past actions he might get into legal trouble for his actions last night.

What are your thoughts on Masvidal vs Covington brawl?