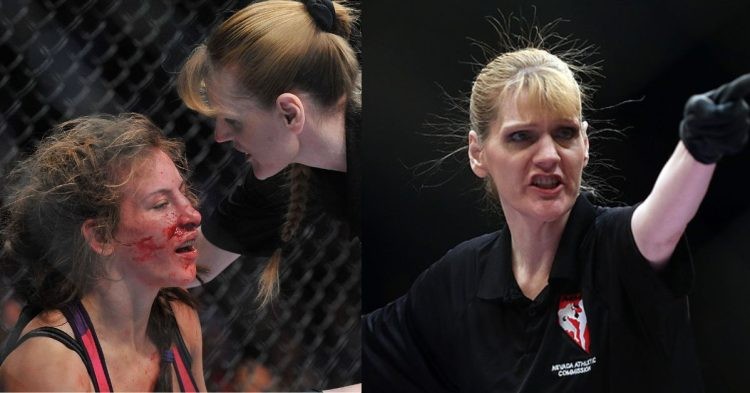 Kim Winslow was the first female referee to officiate in the UFC. (Credit: Twitter)

Kim Winslow is a former mixed martial arts referee. Most notably, she is the first female to officiate a match in the UFC, with an undercard fight on the final episode of The Ultimate Fighter 9 finale between Nick Osipczak and Frank Lester in 2009.

However, during her time as a referee in the UFC, WEC, Strikeforce, Shark Fights, WSOF (now PFL), Bellator, and more, she has garnered a negative reputation. From her first stint in the UFC in 2009, her officiating has seen a steady decline, most notably after her decision-making during Miesha Tate vs Cat Zingano in 2013.

After a few more outings, Kim refereed her last UFC fight, Willie Gates vs. Darrell Montague, at The Ultimate Fighter 21 Finale in 2015. Since then, Kim has refereed in promotions like Invicta, WSOF, RFA, and WFC, with her last fight being Jake Heun vs. Vinny Magalhães at WSOF 30 in 2016.

Following her refereeing career, there have been many rumors of what Kim Winslow has been up to since her departure from MMA. While some suggested that Winslow went into cosplay for children’s parties, others shared her pictures in mermaid and Snow White getups.

Interestingly, there have also been rumors of the demise of 41-year-old Kimberly Winslow in a car crash in 2019. However, there is no confirmation that it was indeed the referee Kim Winslow, as the name happens to be very common in the USA. Additionally, fans have pointed out that Kim Winslow has a Facebook page linked to her LinkedIn profile, which is still active.

Why is Kim Winslow “hated” in the MMA community?

Kim Winslow is easily one of the most hated referees in the UFC. From late stoppages, and early stoppages, and getting numerous submissions wrong, she has a whole list of goof-ups. The most popular one is her early stoppage of Miesha Tate against her fight with Cat Zingano in 2013.

Miesha Tate was furious with Kim’s decision to stop the fight when she declared, “There’s no way in hell I’d let Kim Winslow referee another fight of mine.” Moreover, there is another instance in Strikeforce where Muhammed ‘King Mo’ Lawal publicly questioned why his fight against Lorenz Larkin was not stopped earlier.

People have also pointed out the inconsistencies in Winslow’s decisions and the reasons she would give for them. Thus, it is not a surprise why many people wanted her gone.

Is Winslow the female Steve Mazzagatti?

Steve Mazzagatti is one of the most controversial referees in the mixed martial arts space. Even UFC President Dana White himself branded Mazzagatti as a ‘f*****g toolbox’. Similar to Winslow, Mazzagatti has had his share of bad calls and unfortunate mess-ups at spotting illegal actions during fights.

Although most referees make a bad call from time to time, there is no doubt in the minds of a lot of fans that these two are a level above the rest and are easily two of the worst refs to step inside the Octagon.

What do you think of our assessment of Kim Winslow? Leave your thoughts in the comments below.