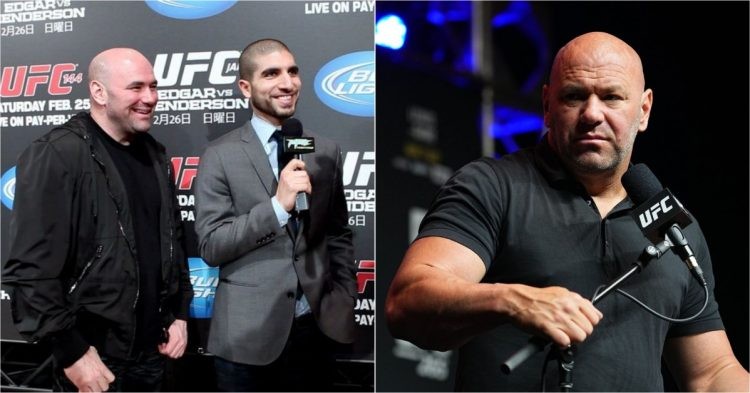 UFC President Dana White is a passionate man and it is clear how deeply he cares about the company through his almost 22 years in charge. When he falls in love with an idea, Dana goes to extreme lengths to accomplish it. He also takes care of the personalities that he likes. However, like his love, Dana’s hatred is also just as passionate. One of the MMA personalities that Dana hates the most is Ariel Helwani.

As UFC fans and MMA fans in general know, Ariel Helwani is perhaps the most famous mixed martial arts (MMA) journalist out there. Ariel is often behind breaking some of the biggest news in the sport. However, he is not on friendly terms with UFC President Dana White. The pair do not get along well and Dana does not leave a single opportunity to bash the reporter.

For clarity, Paddy isn’t going off on Helwani for no reason.

He’s annoyed at Helwani for speaking about him and his manager Graham Boylan, after Paddy turned down in an interview in New York, due to other paid commitments. pic.twitter.com/YKDLLJcFiz

Recently, UFC lightweight superstar Paddy Pimblett joined Dana White for a conversation. During that, Paddy criticized Ariel Helwani and used some very harsh adjectives to describe him. Allegedly, Ariel asked Paddy to do an interview with him and skip a pre-planned paid interview. Paddy The Baddy declined and it apparently hurt Helwani and he seemingly insulted Paddy’s manager Graham Boylan.

Hence, Paddy put Ariel on blast and accused him of using fighters for money. Dana White, who was sitting opposite him during the rant, loved every second of it! He thought Paddy Pimblett’s assessment of Ariel Helwani was accurate and the 53-year-old then labeled Helwani “a piece of s**t.” So what is the source of this hatred? Let’s find out!

Dana White and Ariel Helwani were not always so hostile toward each other. As a matter of fact, they were quite friendly in the early days of the UFC. Ariel even interviewed the UFC President a few times early in his career. However, things broke down completely in 2016 after Helwani broke the news that former UFC heavyweight champ Brock Lesnar would fight at UFC 200.

UFC 200 was going to be a landmark PPV and the company wanted the rematch between Conor McGregor and Nate Diaz to headline the event. But, UFC took the bout off the card after McGregor skipped a press conference for the bout. After that, they wanted to book a bout between Daniel Cormier vs Jon Jones for the card. Even that fell through after Jones’ positive drug test.

Almost in desperation to save the PPV from falling through, UFC got a hold of Brock Lesnar and booked the WWE star to fight Mark Hunt on the UFC 200 main card. Although they planned on keeping it a secret, Ariel Helwani slipped the news to the world. He also revealed that the rematch between Conor and Nate would headline the UFC 202 card.

The incident took place during the UFC 199 broadcast and it infuriated the UFC President who threw Ariel Helwani out of the arena and revoked his press credentials. Not only did he have the MMA Fighting journalist removed, but Dana also banned him from getting his hands on the credentials for any UFC events. The news was meant to be a secret and when Helwani revealed it to the world, it created trust issues internally.

After the ban, Ariel Helwani broke down in tears and issued a clarification from his side about the incident. Although Dana White lifted the ban on Helwani, he held a grudge against the Canadian journalist.

“Ariel Helwani knows I’ve done a lot of s–t for Ariel Helwani… the way that he did it had a lot of people pointing fingers at each other… nobody else does that… when you’re a real journalist, you reach out and say ‘Hey, this is the rumour, this is going on and everything else, and I’m going to run with it.” (h/t via Bleacher Report)

Over the years, Ariel Helwani has worked for both FOX and ESPN to cover the sport. While Helwani was shockingly let go by FOX, Helwani left ESPN after his contract expired. However, Ariel implied that Dana tried to get rid of him previously from both networks and put pressure internally to make it happen. Helwani’s relationship with Dana White is basically non-existent and the two no longer are on talking terms.