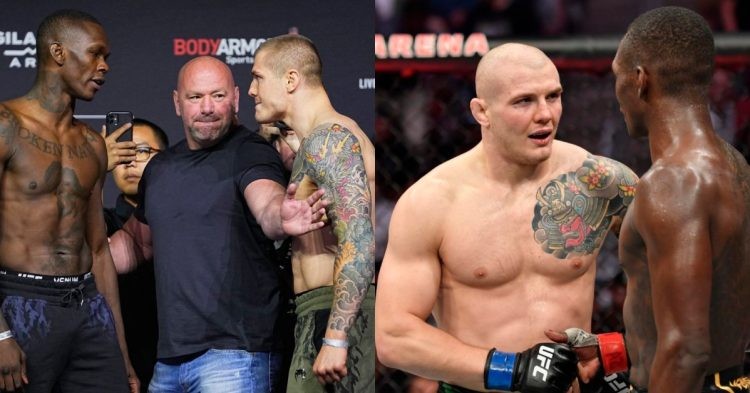 Israel Adesanya vs Marvin Vettori at UFC 263. (Images via Twitter)

Marvin Vettori and Robert Whittaker are in talks to fight each other in the upcoming UFC Paris card later this year. They were initially scheduled to fight at this month’s UFC 275. But it had to be cancelled when Whittaker announced that he was pulling out due to a nagging injury.

Interestingly, Whittaker is still the no. 1 contender despite losing to the champ Israel Adesanya at UFC 271. Marvin on the other hand is sitting at no. 3 after a dominant win over Paulo Costa in October of last year. Hence, a clash between Vettori and Whittaker should determine the next challenger for Adesanya’s middleweight title. But will it?

Both Robert and Marvin have crossed paths against Izzy previously. Coincidentally both have two losses to each Adesanya. Although the logic says that the winner of the fight between the Italian and the Aussie should produce the no. 1 contender for the middleweight title, it may not happen if Israel Adesanya is still the champion after UFC 276.

Robert Whittaker vs Marvin Vettori: Will the winner get a title shot?

Albeit not in a dominant fashion each time, the champ Israel Adesanya still holds two victories each on Robert Whittaker and Marvin Vettori. As a result, either man fighting Izzy next may not be the way that the UFC chooses to go. However, there is still a chance for both The Reaper and Vettori to fight for the 185lbs belt with a win.

Israel Adesanya will defend the middleweight belt against Jared Cannonier on the Internation fight week PPV, UFC 276. Justifiably, Stylebender will be a massive favourite to win the fight. But, one can never be the guaranteed pick to win in combat sports. Jared Cannonier is a very good wrestler with some vicious striking. His finish of Derek Brunson at UFC 271 was as brutal as they come.

So there remains a chance that Cannonier may pull off the upset on July 2nd. In that case, the winner between Robert Whittaker and Marvin Vettori will definitely be the favourites to get the crack at Cannonier next. The case will be stronger for Vettori if he beat Rob. Booby Knuckles has already beaten Cannonier in the past. Hence, a win over Robert makes Vettori a massive favourite to get the jump on Jared.

If Adesanya retains the belt against Cannonier, he already has a potential challenger to his throne. Alex Pereira, the only man to ever knock Israel out, is currently fighting in the UFC. Alex will face Sean Strickland next. If he beats Sean, Pereira will be the favourite to get the next championship opportunity over everyone else in the division.

It will be especially difficult for Marvin to attain the title shot against Israel Adesanya. They fought at UFC 263 and it was not very competitive. He was no match for Adesanya’s striking and after a while, he couldn’t even sniff a takedown after the first round. Hence he is still a long way off from getting the trilogy bout against Israel for the belt,

Do you think either Marvin Vettori or Robert Whittaker will get the title shot next? if not, what do you think is next for both men? let us know in the comments down below.