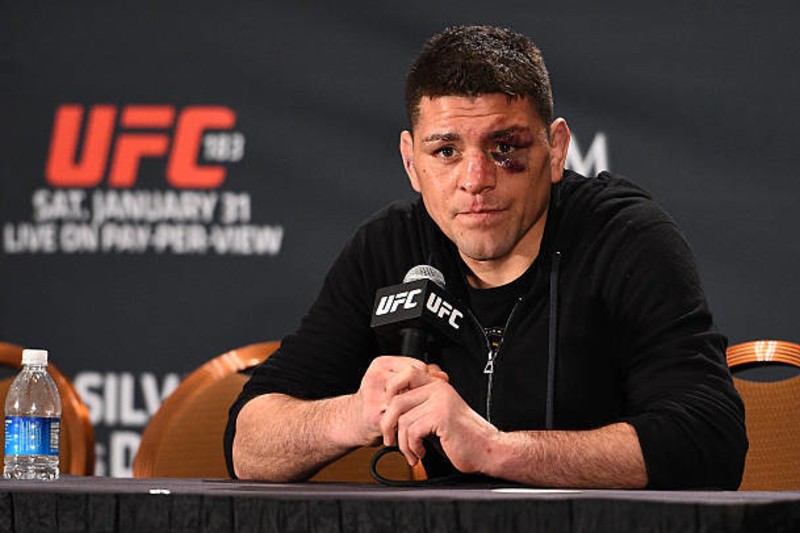 Nick Diaz is one of the best fighters to ever step foot inside the cage. And it’s hard to believe that in his long and dominating career he has never won a championship. Diaz is well known for his interviews and press conference. He speaks his heart out and doesn’t think of any consequences. This attitude of his is the main reason for him having some wildest exchanges between others and the fighter. Here are some of the wild notable press conference moments of Nick Diaz’s career.

The Diaz vs St-Pierre fight was something that made a lot of hype back then. For Diaz, it was probably the biggest fight of his career. The Stockton native went against the poster boy of UFC, Georges St-Pierre at UFC 158 inside the Bell Centre in Montreal, Canada.

The trash talk between the fighters started from the press conference itself. MMA fans were calling it the ” good guy vs bad guy ” fight. During the heated press conference, Diaz expressed his opinions about how the UFC likes to portray him as the bad guy while promoting and selling the fight. He said, ” I hate to play the victim card but I like to think it’s not always my fault that I come off the way I do.”

Interview with Ariel Helwani before Strikeforce fight Diaz vs Daley

Ariel Helwani is a Canadian journalist who has been covering news about MMA for a long time. The journalist is well known for getting under a lot of fighters ‘ skin. Many fighters just simply ignore him and get annoyed by his presence. The same was seen when Helwani interviewed Nick Diaz ahead of his fight against Daley in Strikeforce.

Diaz immediately stated his opinion by saying he didn’t want to do the interview but he was asked and he didn’t have any choice. When Helwani asked about that, Diaz said ” I feel like you instigate fight quite a bit but that’s your job but where I come from, you know people like that get slapped“. Throughout the interview, Diaz looked uncomfortable and the lack of interest for the interview was clear.

Nick Diaz’s on steroids accusations and a five-year ban

Diaz brothers have always been open about their use of weed. So, Nick never tried to hide and explained that it helps him while training and healing. In 2015 he got banned by the NSAC because of multiple failed drug tests.

Diaz was furious about it and in the interview after the meeting he said.

“ That’s pretty much this whole sport has been trying to keep me from where I belong and that’s the number one position. I’m the biggest draw. I’m the best fighter. I’ve been fighting for longer. I’ve been throwing more punches than everybody in the sport. I’m going to dodge more punches than everyone in this sport. And that’s the bottom line. That’s what’s really going on. We got a whole system trying to hold me down“.

He also put some serious accusations on other fighters by saying:” That’s another thing I’ll tell you right now, I know all the fighters and they are all on steroids. All you motherfuckers are on steroids” and conclude by saying “I’m the only person, in this sport, for the most part, that ain’t on steroids”

Diaz defeated BJ Penn at UFC 137. After the fight, Diaz called out St-Pierre by saying the champ didn’t want to fight. In the post-fight press conference held in Las Vegas, Nick opened up about his life and explained how hard it is for him to train and win the fights.

Diaz told:” I had a hard time getting right sparring partners, nobody wanted to spar with me because there is nothing for them and they are intimidated by me“. He also explained that he is working a lot with no excuses like other fighters but not getting paid what he deserves. It was difficult and unexpected for Diaz to show raw emotions about the frustration and anger he was hiding.