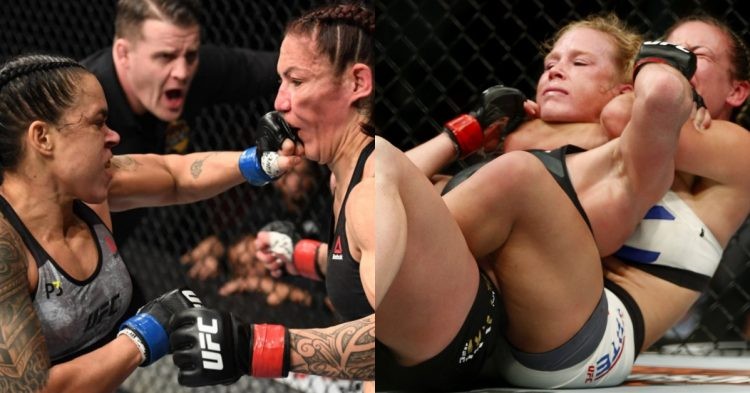 When two fighters in their absolute prime, meet in the middle of the Octagon, magic happens! It was certainly the case when (then) UFC Strawweight Champion Zhang Weili came face to face against Joanna Jedrzejczyk in the co-main event of UFC 248.

Both Weili Zhang and Joanna Jedrzejczyk left parts of their soul in the middle of the Octagon as they battled it out in an all-time classic. In 2019, Weili fought for the belt against Jessica Andrade in her home country of China. She knocked Jessica out in the first round to become the first-ever Chinese UFC champion. Her fighting style made Weili a must-watch fighter.

The former Strawweight queen Joanna Jedrzejczyk had beaten Michelle Waterson in 2019 to earn the title shot against Zhang. There was excitement about the fight due to the nature of their respective fighting styles. Both Joanna and Weili possess elite kickboxing skills and neither back down in the face of adversity. The UFC President Dana White was a massive advocate of the fight taking place and he was not wrong!

The bout ultimately became the most entertaining female fight in UFC history. From round 1, the atmosphere in the arena was absolutely electric as if they knew they were about to witness history. The champ initially had much more success in the first round. But things became intense as the bout went on Joanna went all out to regain the belt.

In the end, Zhang got the win via split decision as two judges scored 48-47 for her. One judge had the same score but in favour of Jedrzejczyk. But the stats say a different story. Weili landed 165 of 408 strikes. But Joanna landed 21 significant strikes more as she landed 186 out of an attempted 360. But the fans ultimately did care about the result as they hailed both women for the spectacle.

Neither has been the same since the bout. Joanna’s face was horribly disfigured following the bout and she is yet to compete since then. Weili on the other hand dropped the belt to Rose at UFC 261 and lost the rematch at UFC 268.

As fate would have it, Zhang and Joanna will once again cross paths at the upcoming UFC 275. In honour of their rematch, let’s take a look at female UFC fights that are as significant and entertaining.

At UFC 205, Conor McGregor started the trend of becoming the champ-champ by holding the featherweight and lightweight titles at the same time. However, the first female fighter to do it was The Lioness Amanda Nunes at UFC 232.

She was the bantamweight champion at the time and moved up in weight to challenge Cris Cyborg for the featherweight title. At the time, Cyborg was seen as an unstoppable force. But Nunes ended the contest in just 51 seconds! Cyborg got reckless and tried to rush Nunes with haymakers. Nunes accepted the challenge and started swinging for the fences as well. She landed the better shot and became the first female UFC champ-champ.

The event was famous for Conor McGregor vs Nate Diaz 1. But the co-main event featured one of the best come back wins the UFC history! Holly Holm was set to defend her UFC Bantamweight Championship for the first time against Miesha Tate.

Although Tate was certainly competitive in the first 4 rounds, it was clear that Holly Holm was winning the bout. Tate needed to do something dramatic to finish the bout. That is exactly what she did with only 2 minutes left on the clock. Against the run of play, she secured a takedown and submitted Holm via a rear-naked choke and became the new 135lbs champion.

Zhang Weili was coming off the best women’s fight ever against Joanna Jedrzejczyk at UFC 248. She showed incredible durability during that 25-minute war! Hence, fans expected her to have a much easier time against Rose Namajunas at UFC 261. Instead Rose knocked her out with a front kick at the 1:18 minute mark of the fight.

It set up a rematch at UFC 268. This time around, it was a completely different fight. Rose had some early success in the first round. But Zhang quickly changed up her tactics and it made for a very interesting fight to behold. Weili landed 5 takedowns as opposed to Rose’s 2. Not only that, but she also outstruck Rose with 32 more shots.

Rose landed 130 total strikes out of an attempted 219, whereas Zhang had the figures of 162 out of 272 strikes. But Namajunas had more significant strikes with 86 as opposed to Weili’s 83. She also enjoyed much more control time on the ground with 7:00 minutes of total control. Despite landing more takedowns, Zhang only had a control time of 3:37 minutes. Rose won the bout via split decision.

The two met for the first time at UFC 237 in May of 2019. Rose was coming fresh off her two monumental victories over Joanna Jedrzejczyk. She was the favourite heading into the fight to retain her belt. But one body slam from Jessica ended the night for Rose.

Following the loss, Rose took a break of more than a year. She took on Jessica in her return fight as well. Just like the last bout, she was looking amazing initially. However, things started to go south from the end of the second round. Known for her heavy punching, Andrade landed a few bombs that busted Rose’s nose and in a great display of heart, Rose survived the last round.

Rose was chosen to be the victor as she edged out a split decision victory over Jessica. All three judges’ scorecards read the same 29-28. One judge favoured Jessica while the other two opted for Rose.

How Valentina Shevchenko Had a Massive Impact on Her Country Kyrgyzstan?