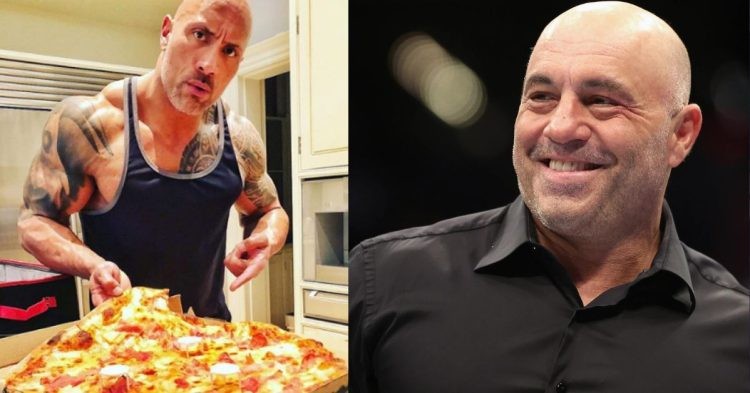 Joe Rogan always has been a massive supporter of Dwayne Johnson. While “The rock” is famous for being an A-list actor Joe Rogan on the other hand is extremely famous globally due to his profound podcast. The audience is diverse in size and shape, and the majority of the episodes last for roughly three hours.

The Joe Rogan Experience exposes its audience to a variety of various ideas and ways of thinking through interviews with celebrities, performers, scientists, sports, and people who simply have fascinating tales or interesting minds.

The podcast has over 1,700 episodes and an average of 11 million listeners, making it one of the most well-known podcasts in the world. Spotify also paid over $100 million on exclusive rights in 2020.

Rogan likes to discuss all sorts of things during the conversation he has with his guest. However, one of the most well-known genres is with regard to wellness and nutrition. Recently Iliza Shlesinger, a comedian recently spoke out against what she saw as the Rock’s “performative” behaviour.

The rock must maintain his peak muscular condition because he is one of the most well-known actors and usually his roles demand it. That being said, he began posting pictures of his cheat meals in an effort to convince the public that it is only reasonable to allow oneself to take a break occasionally. Pancakes, hamburgers, waffles, sushi, pasta, bagels, and other similar foods are among them.

During the podcast she stated, “His cheat day meals really bother me. They’re insane, but they’re not really indulgent. They don’t look like real pancakes, it’s like protein, coconut… Turkey bacon, it’s never the full indulgence.”

Joe Rogan came out in defence of the Dwayne Johnson. He responded by stating, “That’s the guy that literally makes a living off of being lean.”  He then claimed that maybe she is overthinking too much on it. He stated, “Maybe it’s in your head, maybe you need to let it go”

There is some conditioning involved in what you eat, even though what she is trying to say makes sense. She’s definitely right that cheat days like she’s describing would be very harsh for his digestive system if he’s been on a certain diet for so long. However, the day to day eating habits of the rock is not known.

Dwayne Johnson has stated numerous times that he wants the physique we see on screen in his upcoming film to “raise the bar” which is a bold statement coming from a man who looked flawless in Hobbs and Shaw.

For his part as the title character in “Black Adam,” Dwayne Johnson claimed to be on a strict new diet. His exercises start with 30 to 60 minutes of cardio followed by his “Power Breakfast,” his first meal. He then exercises his muscles for about 90 minutes.

Dwayne Johnson works out with a lot of resistance and at a high intensity, at least according to his social media. The Rock’s diet and training regimen are very stringent on an average person’s body and probably inappropriate for the majority of people.