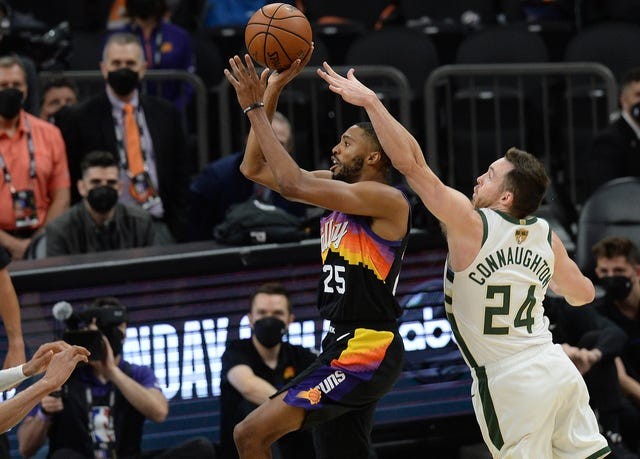 The Milwaukee Bucks have now won 3 games in a row in the NBA Finals. They are up 3-2 in the series against the Phoenix Suns. Milwaukee is now just 1 win away from winning the NBA Finals. We’ve now seen, 2 back to back competitive games. Phoenix lost by just 4 points even though they had a huge lead.

Phoenix got rid of their shooting problems after making 13 of their 19 3-pointers. Their big 3 combined for 81 points and everyone shot extremely efficiently. However, defensively, they just cannot stop the Milwaukee Bucks. After leading by 16 points at the end of  the first quarter, Milwaukee outscored them by 26 points in the next 2 quarters. The Suns could barely survive with Giannis dominating, but with Khris and Jrue Holiday? They are no match for them.

The Milwaukee big-3 outshined the Suns big 3 and combined for almost 90 points. Giannis is a lock for Finals MVP if they win this series. Jrue Holiday had 27 points, 13 assists and 3 steals. One of those steals gave us the best sequence in this NBA Finals. The Bucks as a team shot 58% from the field. Their individual scoring performances helped put the Suns away. Milwaukee have stole the game they wanted from Phoenix and could finish off the series at Milwaukee for Game 6.

Tonight, both the big 3’s battled it out but it were the 2 underdogs who were key in keeping the game competitive. Those ‘Underdogs of the Night‘ are Pat Connaughton and Mikal Bridges.

It’s clear to see that at home court, Mikal Bridges thrives. He had 2 amazing performances for the Suns in the first 2 games and another tonight. His stat line was 13 points, 4 rebounds, 2 steals, 1 block whilst shooting 83% from the field. He also did not miss a single one of his 3’s. This was surely a bounce back game and hopefully he does more of this in Game 6 as well.

Pat Connaughton suddenly went from 7 points per game in the regular season to 11 points per Game in the NBA Finals. Tonight, he scored 14 and grabbed 6 rebounds whilst shooting 66% from the field and the 3. He has really stepped up and taken control of the role of 6th man. With Donte DiVincenzo out, if seemed like the Bucks were massively hindered in the bench scoring department. But Pat Connaughton has done well to replace him. If the Milwaukee Bucks win the NBA Finals, all NBA Fans will know that they could not have done it without Pat.

Also Read: Giannis Antetokounmpo : A Story Of Rags To Riches