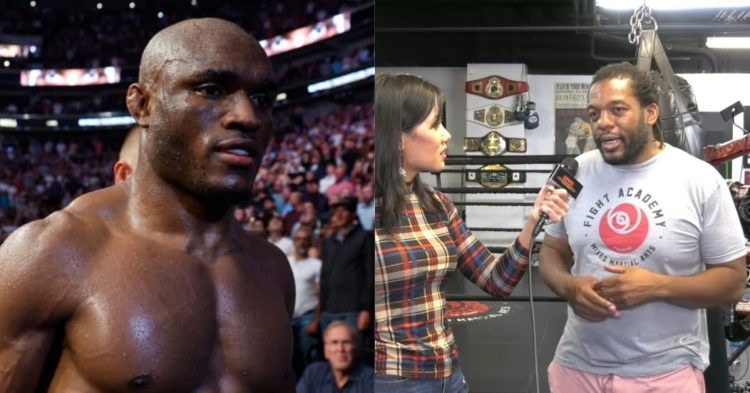 Alongside ‘Big’ John McCarthy, Herb Dean is regarded as one of the best MMA referees. He not only officiates inside the Octagon, but he also tries his best to educate the fans and the fighters on the rulesets of MMA.

Recently he had an interview with Helen Yee where he spoke on the controversy which occurred in the main event of UFC 278. Leon Edwards challenged Kamaru Usman in the PPV for the welterweight belt. Although Edwards won the fight in the last round, there were complaints regarding the lack of action against Kamaru for fence grabbing.

During the first round of the fight, Usman was taken down for the first time in his career. While he was scrambling, Usman grabbed the fence multiple times. The Nigerian Nightmare even grabbed Leon’s gloves while trying to survive a potential submission attempt from Leon. It made the fans question Herb’s officiating.

During the interview, Herb explained why he chose not to take action against Usman. He said that taking a point away from a fighter is equal to taking away a win. He explained that in a 3-round or a 5-round fight, taking a point away impacts more significantly than it does in boxing where there are 12 rounds.

Although Herb Dean tried his best to explain his decision, the fans still pointed out Herb’s faulty calls in the fight. Herb tried to communicate the importance of identifying the difference between fouls that are harmful and the ones that are not. Hence, it is up to the judgement of a referee on what their perspective is.

However, fans did not excuse the lack of action from Herb Dean during Usman’s offences. As mentioned above, there wasn’t any lack of unlawful actions from the former UFC champ. One fan pointed out that Herb reset the action as he thought Leon had grabbed the fence which is illegal. But when Usman did the same, Herb did not deem it outside the law.

LOL Edwards got penalized for a fence grab after Usman did it unpunished like 75 times and the announcers are praising Herb Dean.

So usman can grab the fence but Leon can’t ??😭😭 Herb Is absolutely useless

Although the complaints from the fans are understandable, they also have to keep in mind that the action during an MMA fight is fast and furious. So the referees may miss some fouls that occur in the fight. But there have been multiple occasions when the referees made calls that ultimately turned out to be great.

What do you think of Herb’s comments? Do you empathize with him? Or do you agree with the fans who have called out Herb Dean? Let us know your thoughts on the matter in the comments down below.