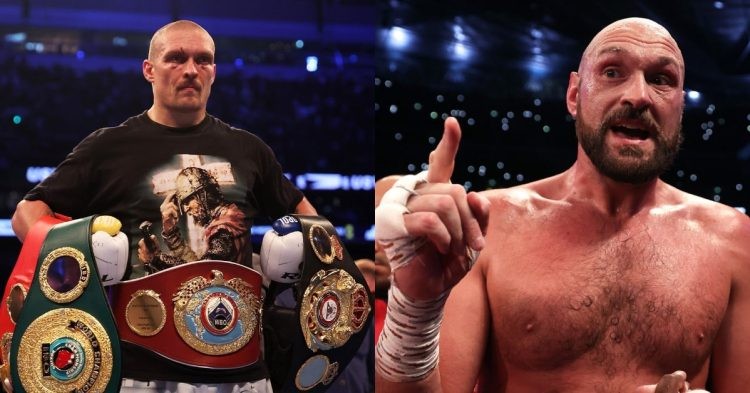 Oleksandr Usyk is at the top of the boxing world now. He currently holds the WBA (Super), IBF, WBO, and IBO Heavyweight Championships. Usyk also got his hands on the vacant Ring Magazine heavyweight title with the second win over Anthony Joshua on August 20th. Fans are now eager to see him going up against Tyson Fury in his next fight.

However, one of Tyson Fury’s most famous rivals, Deontay Wilder does not think Tyson Fury will be an easy match-up for the current champ. Wilder fought Fury 3 times in the period of 2018 to 2021. While the first one was a split decision draw, Fury knocked out Wilder in both of the next two fights. Hence, there is no other fighter who knows Fury better than Wilder.

In a recent interview with ES News, Deontay spoke a little about what is next for him and when the fans can expect to see him back in the ring. But the conversation eventually turned to the chatter of a heavyweight fight between Fury and Usyk. He thinks Usyk will have a significant size disadvantage against Fury.

“I think Fury will be too big for him. He just uses his size all the time, no matter what, and a lot of other things. I think Usyk’s too small, that’s my opinion.”

As fans may have noticed, Fury tends to lean onto his opponents during his fights. Tyson uses it as a tool to put pressure on the other fighters. Fury is officially billed as 6’9. Hence, a man of his size leaning on someone is sure to have an effect on a fighter’s stamina. Wilder feels Usyk’s stamina is already not good enough to face Fury.

“I think Usyk has a stamina problem as well. You saw with Joshua, if Joshua had enough stamina it’d probably be a different result.” (h/t via Boxing Scene)

There is some validity to Wilder’s points as the Ukrainian fighter did have some issues with his output in the fight against Joshua. Both Joshua and Usyk were in peril at different points in the fight. Hence, the result could have been different if Joshua’s cardio held up.

On top of that Oleksandr is 6’3, although his height is not short by any means, it pales in comparison to Tyson Fury’s. So it may play a big factor in their potential fight.

Tyson Fury is currently retired from the sport of boxing. Fury faced Dillian Whyte in April of 2022 and stopped him in the 6th round. However, he announced his retirement following the bout. Although he was interested in a special attraction fight against UFC heavyweight champ Francis Ngannou, Fury did not want to continue his boxing career.

But, it looks like that is about to change as he put out an interesting message following the fight. Fury stated that he is more than open to coming out of retirement but it will not be cheap. The Gypsy King stated that it will take him half a billion dollars ($500 million) to put on the gloves once more.

Do you think Tyson Fury is serious about coming back against Oleksandr Usyk? If he is serious, do you think $500 million is a realistic purse to ask for? Let us know in the comments down below.