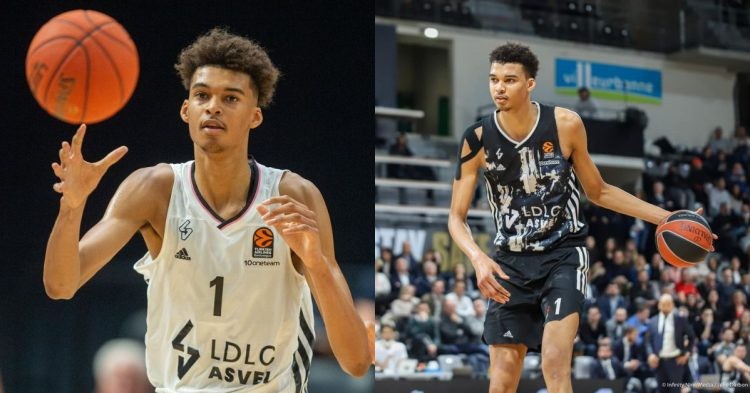 There is a world-class prodigy who has been the talk of the NBA town in recent weeks. He has attracted the attention of many top stars in the league and his name has been on everyone’s lips for a while now as the league eagerly waits for his arrival. It is none other than French youngster Victor Wembanyama.

Victor currently plays for the LDLC ASVEL. He also used to play for the Paris-based team, Boulogne-Levallois Metropolitans 92 in France. He was born on January 4th, 2004, and is currently 18 years old. VW will be able to clear himself as eligible to enter the NBA draft next year. In the 2021-22 season, Wembanyama averaged 9.4 points, 0.8 assists, and 5.1 rebounds per game in the LNB Pro A league, according to Basketball Reference.

His numbers are not the main reason why he has become popular quickly. Victor stands at 7 feet 3 in tall and has a wingspan of 7 feet 9 in, together with 9 feet 7 in standing reach. Victor even said to ESPN, “I am 7 foot 3 in bare feet. Act have never measured myself with shoes. But it habe like 7 foot 4 in or 7 foot 5 in I guess.”

Will Victor Wembanyama be the first overall pick in the 2023 NBA Draft?

His height, wingspan, and reach clearly indicate that he would be a dangerous threat to teams in the NBA. He averaged at least 5 rebounds in his last high school season, and at least 4.1 were on the defensive side of the court.

His height and numbers have got NBA stars like Stephen Curry talking. The GSW star hilariously mentioned that VW was like a “2K Create-A-Player”. There have been many teams who reportedly have been looking to acquire Victor and the Golden State Warriors will be no different. In addition to Steph, LeBron James has also praised the young superstar.

LeBron James speaks on Victor Wembanyama being “a generational talent” 👀

LeBron said, “Everybody has been a unicorn for the last two years, but he’s more like an alien. I’ve never seen — no one has ever seen anyone as tall as he is, but as fluid and as graceful as he is out on the floor.”

“The league’s really in trouble when he comes in.”

“That type of talent and skill…. it just puts a smile on your face if you play basketball, you know? The evolution of the game has taken us this far when we’ve got 7-foot-5 dudes able to do everything on the court… The league’s really in trouble when he comes in,” Kevin Durant praised Wembanyama.

Victor isn’t in the NBA yet, but when he makes it, he will be the tallest player in the league. Moreover, that will not be a disadvantage for him at all. As the three of the greatest players said, his height only adds to his strengths. Durant also spoke about how he can do everything on the court. We can only wait with excitement to witness all the magic Victor is going to do on the court.