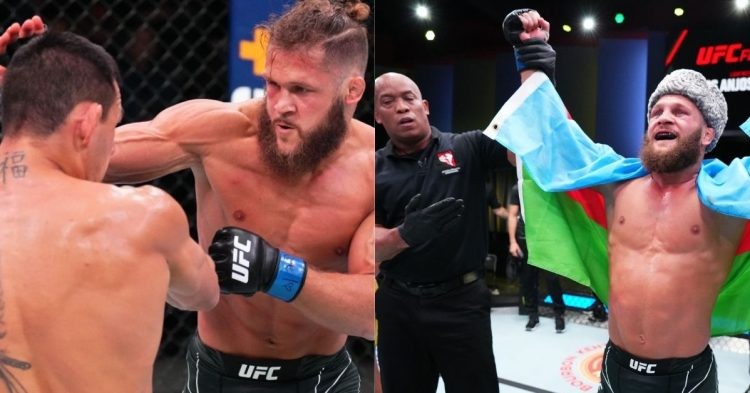 Former lightweight champion Rafael Dos Anjos headlined the UFC Vegas 58 event as he took on Rafael Fiziev in a five-round bout. Going into this fight, both RDA and Ataman were riding high on confidence as they were coming off impressive victories in their respective matchups.

This was a very crucial matchup for Dos Anjos who was #7 in the division as a loss would put him down the pecking order and any hopes for contending for the title in the future would go out of a drain. On the other hand, Fiziev’s five-fight winning streak was on the line as he squared off against his toughest challenge.

Speaking about the result, Rafael Fiziev successfully extended his winning streak to six straight wins as he stopped Rafael Dos Anjos early in the fifth round. However, this wasn’t an easy fight for Ataman by no means. He had to work extremely hard as Dos Anjos attempted a lot of takedowns and tired him out.

The Kyrgastani lightweight stuffed nine out of ten takedown attempts of Dos Anjos and landed some good straight hands and jabs. Although it looked like the fight was going in the favour of RDA as he landed a takedown in the fourth round and also landed some good punches and knees.

But Fiziev’s aggressive approach as soon as the fifth round started helped him to find a spectacular finish as he confused Dos Anjos with a feint and landed a powerful left hook to drop him. Thereafter the referee quickly intervened and stopped the fight before Fiziev could dish out any more damage.

It seems like Rafael Fiziev has made it a tradition to make a bizarre callout after winning fights and it was Tennis superstar Rafael Nadal who was namedropped after his fifth-round KO win over Rafael Dos Anjos.

Who does Rafael Fiziev want next in the Octagon?@RafaelNadal 😅 pic.twitter.com/3Btfo5b82u

However, later in the post-fight interview with Michael Bisping, Ataman expressed his desire to fight a lightweight contender who is in the top five rankings of the division. It is safe to say that he will most likely get his wish after defeating a tough opponent like Rafael Dos Anjos in such a brutal manner.

In the end, regardless of who he fights next, one thing is for sure Fiziev will entertain everyone with his brilliant striking and comedic post-fight call-outs. Do let us know your thoughts about Rafael Fiziev’s performance at UFC Vegas 58.