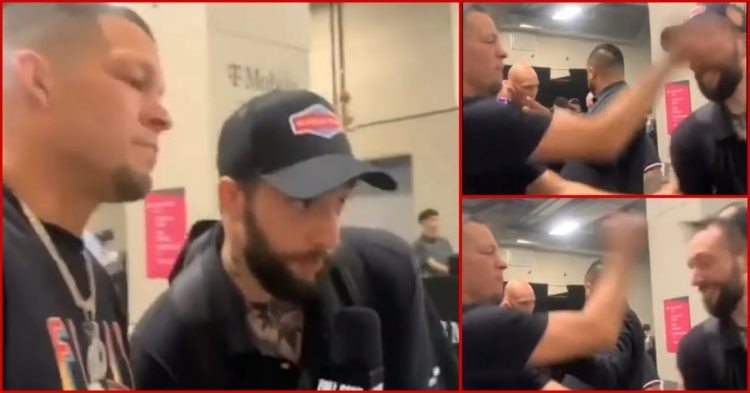 It seems like the night of UFC 276 was filled with backstage drama. At the beginning of the night, lightweight stars Dustin Poirier and Michael Chandler were involved in a shouting match. Now it looks like Nate Diaz also caused some drama backstage as he put his hands on a reporter for FULL SEND MMA.

In a viral video, the younger Diaz brother was seen speaking to the journalist. Nate was asked whether he was there to support Sugar Sean O’Malley or not. Nate replied that he was not there for Sean and then said something that was inaudible. He seemed to refer to a past incident where the man had something to do with a tweet.

However, the reason is not exactly clear as the audio from the clip was extremely difficult to comprehend. Although it was an open hand slap, it seemed to be directed towards the guy’s hat instead of the face. The 37-year-old also smacked the mic out of the journalist’s hand. As of writing this article, there has not been any comment from the journalist.

It is an interesting period of time for Nate Diaz. It is no secret that Nate wants to leave the UFC. Since the beginning of the year, he has been asking for a release from the UFC. Although the company is yet to make any official decision on the matter, UFC President Dana White seemed to be on board with the idea of letting Nate go.

Recently in an interview with The MacLife, White commented that Diaz should be looking to make the jump into celebrity boxing territory. Hence, it seems extremely unlikely that Nate will sign an extension after his current deal expires. He apparently has one more fight left under his UFC contract before he becomes a free agent.

But he may get his release without fulfilling the contract. Jake Paul has a fight coming up on August 6th inside the Madison Square Garden against Tommy Fury. However, the recent developments around Fury may see the fight getting cancelled once again. Paul will need to find another opponent in case the bout against Tommy does not come to fruition. Diaz would be the perfect candidate to replace Fury.