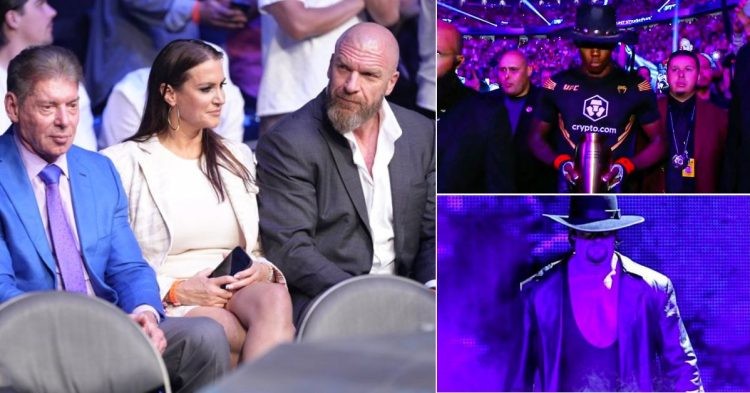 Israel Adesanya walks out to The Undertaker UFC 276

Every time Israel Adesanya steps inside the Octagon, he somehow manages to top his last appearance inside the cage. At UFC 276, it was no different as the middleweight champion walked out to the theme song of none other than former WWE superstar The Undertaker.

Israel Adesanya before his walkout at UFC 263 (2021) pic.twitter.com/4KxxE8vefO

Moreover, with Vince McMahon, Triple H, and Stephanie McMahon inside the T-Mobile Arena, it added a lot of extra flavor to the entire sequence.

Israel Adesanya took on Jared Cannonier in the main event of UFC 276 in Las Vegas. Stylebender gave complete justice to Undertaker’s memorable walkout by carrying an urn and donning the black hat.

Needless to say, Daniel Cormier, who is a huge WWE fan just couldn’t keep his calm at the sight of Israel Adesanya walking to the Octagon with the music of the Deadman.

Why did Israel Adesanya use The Undertaker’s WWE entrance music at UFC 276?

In the lead-up to UFC 276, Adesanya emphasized putting on a highlight-reel performance. Even in the promos, he talked about “showing-off” and putting on a show for fight fans around the world.

It won’t be wrong to say that walking out to The Undertaker was but a sheer display of what Stylebender was referring to as “show-off”. Moreover, it could just be a reference to his dominance in the UFC’s middleweight division and how he has buried almost all of it.

While paying a tribute to The Undertaker from a huge WWE fan like Israel Adesanya is apparent, Stylebender definitely was trying to send a message to his next opponents.

Adesanya emerged victorious in the main event of UFC 276, picking up a comfortable victory over Jared Cannonier via unanimous decision to successfully defend his middleweight gold in his sixth title defense. With the victory, Adesanya has further cemented his legacy as arguably the greatest middleweight fighter in modern history.