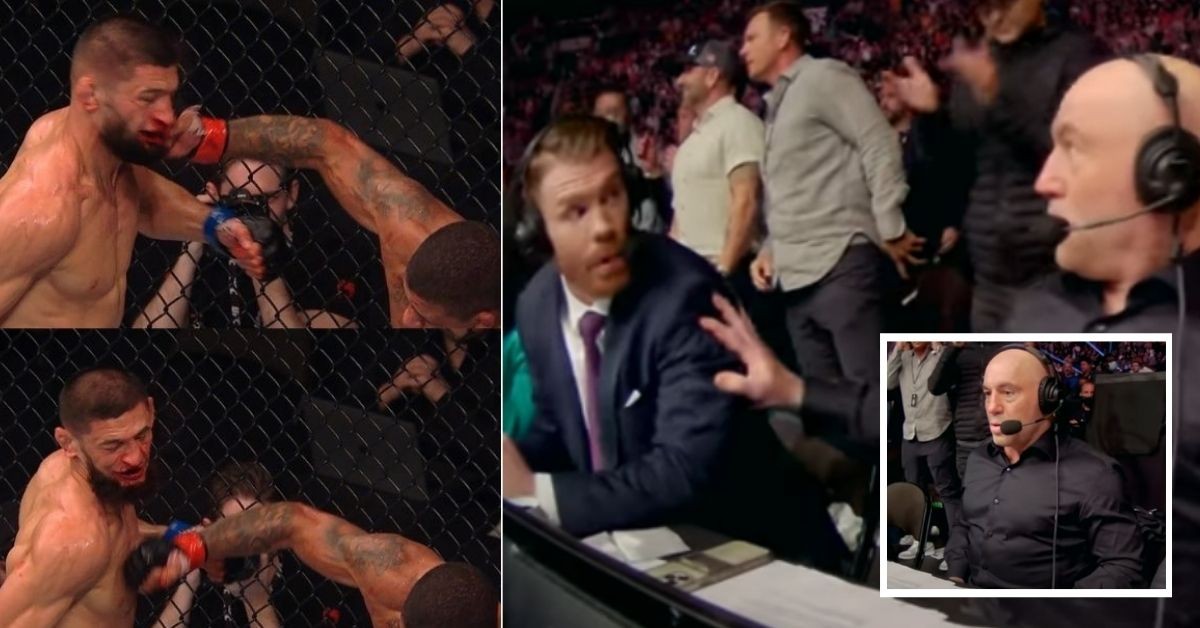 Joe Rogan, Paul Felder, and Jon Anik, along with the fight fans walked into the arena with their hopes up to witness the spectacular events at UFC 273, especially Khamzat Chimaev vs. Gilbert Burns.

Despite Volkanovski vs. The Korean Zombie being the headliner for UFC 273, Gilbert Burns vs. Khamzat Chimaev earned the most anticipated fight of the event.

Gilbert Burns and Khamzat Chimaev finally shared the UFC Octagon in an epic three-round battle. Being the most awaited fight of the event, the fans surely got what they came for. While Khamzat kept his record unblemished, Gilbert also proved a true warrior, and put up a fiery battle.

All three commentators could be seen screaming in excitement as some striking exchange takes place. Paul Felder could be seen standing from his seat in the final seconds of the clip due to the sheer adrenaline rush. Joe Rogan was also seen screaming out loud when Khamzat got dropped by Burns.

Going into the fight, Chimaev was looked upon as a ruthless fighter who never had to face any adversity. However, after UFC 273, Chimaev finally got the test of an elite as he faced his first real competition inside the UFC Octagon against the toughest challenger in Burns.

The Chechen was blowing guys out in two different weight classes and making it look so easy that after just four fights in the UFC, he had become some kind of a cult hero, and picked up the title of “the scariest man in UFC”.

The hype around Chimaev is very real, as he proved he’s an elite fighter. It was hardly easy, as he was dropped twice in the second. He ate a series of hard shots throughout the fight, but he won by scores of 29-28 on all three judges’ cards. Talking about the fight, Khamzat said:

“I didn’t know he was so tough,” Chimaev said to Joe Rogan in the Octagon afterward.

As typical, Chimaev was all aggression, racing out of his corner and firing a big right hand, went for the takedown. But unlike in his other fights, Burns dodged the right and not only defended the takedown, but also the ground-and-pound. Chimaev ate some huge shots and got dropped for the first time in his career.

Both of them were bloodied up at the end of the fight, while ‘Borz’ won the first and third rounds and Burns took the second in a not-so-difficult fight to score.

“Every time I step in here, I give everything I got,” Burns said. “They’ll have to kill me. Because I won’t stop.”

The two definitely put up a show for the fans while Burns proved how tough and durable a veteran he is, who is going to win more often than not. The crowd was on its feet as the battle ended. These two put on a show that will be talked about for a long time.