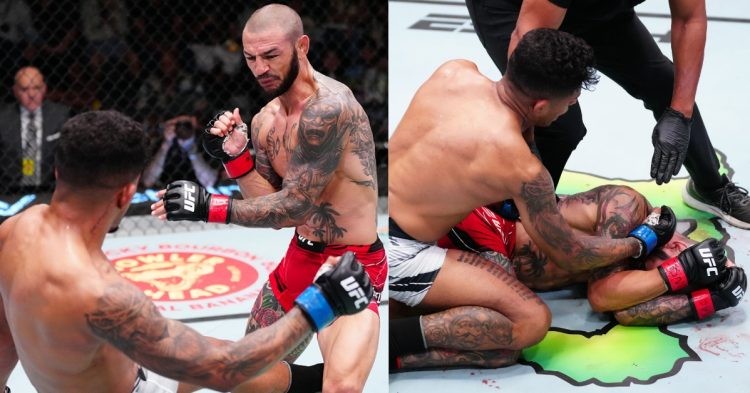 Bantamweight contender Cub Swanson returned to action as he took on Jonathan Martinez in a three-round co-main event bout on the main card of UFC Vegas 62: Grasso vs Araujo.

However, his return inside the octagon didn’t go as per his plans as he suffered a brutal TKO loss in the second round of the fight. Martinez dropped Cub Swanson on the floor with a devastating inside leg kick and referee Herb Dean quickly intervened and stopped the fight.

Speaking about this matchup, both the bantamweight fighters exchanged some hard-hitting shots in the first round. Jonathan targeted Swanson with his leg kicks and troubled the veteran throughout the first round.

His hard work paid dividends in the final minute of the first round as he landed a big knee and dropped Swanson. Thereafter Martinez almost finished the fight as he attacked Swanson with some nasty elbows. However, Cub managed to survive the onslaught as he was saved by the bell.

In the second round, Jonathan Martinez continued working on the leg kicks and it started affecting Swanson as the round progressed. The bantamweight veteran attempted a comeback and landed some big shots. But the American fighter showed great durability and exchanged some big blows.

Thereafter Martinez dropped Cub twice with two consecutive inside leg kicks. After piling up the leg kicks, he mixed them up with his combinations and finished Swanson.

Jonathan Martinez earned unarguably the biggest win of his career as he finished Cub Swanson in the second round of the fight. With this victory at UFC Vegas 61, Martinez is on a four-fight winning streak.

The American bantamweight picked apart Cub Swanson with his leg kicks and after his violent finish, fight fans were quick to compare him with lightweight contender Edson Barboza on Twitter.

Jesus Christ that was a crazy leg kick TKO. I think that was the last one since Edson Barboza. Kinda feel bad for Cub but good job by Martinez his striking is amazing.

Jesus Christ that was a crazy leg kick TKO. I think that was the last one since Edson Barboza. Kinda feel bad for Cub but good job by Martinez his striking is amazing.

If he’s going to be my favorite fighter I should get his name right. Johnny Martinez!

It is amazing to watch

Jonathan Martinez is wild. He dropped Cub Swanson with a knee, a flurry of elbows and three times with leg kicks #UFCVegas62

Martinez has definitely made a statement with his TKO win over Swanson at UFC Vegas 61. He has all the tools to make it big in the division, with that being said, it would be fascinating to see who he faces next.