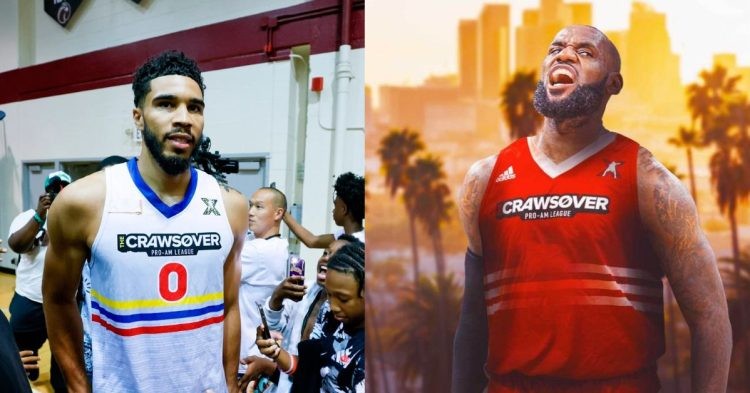 LeBron James and Jayson Tatum put aside the age-old Lakers- Celtics rivalry to team up at the “CrawsOver Pro-Am” league. To those interested, the CrawsOver is a high-level summer professional amateur league. It is based in Seattle and was founded by Jamal Crawford, a veteran NBA player.

We were all excited to witness this level of basketball as we are still months away from the NBA season beginning. One must wonder how the two stars of the NBA basketball royalties performed and what the environment was like in this match.

This was, without a doubt, one of the loudest and most out-of-control games NBA stars have played in. The Seattle fans were simply having the time of their lives witnessing NBA-level basketball. Moreover, some of them even ran onto the court and disturbed the game proceedings at times.

Nonetheless, King James and JT showed what they are capable of doing and delighted the fans with displays of dominance. The fans absolutely loved LeBron and cheered every time he touched the ball. They lost their minds when the 4x NBA champion pushed off the opponent, driving to the rim and finishing with a high-level dunk.

Tatum seemed to be unable to miss as he knocked down repeated three-point shots from various positions regardless of who was guarding him. Both stars showed higher levels of athleticism and play throughout the game. Unfortunately, this game was shortened and ended quite abruptly around halftime due to on-court condensation. Simply speaking, the air conditioning was ineffective in the packed hall.

This was the first time King James participated in the CrawsOver. Additionally, he has not played in Seattle since 2007.

SEATTLE LETS GET IT!! Been over 15+ years since I’ve been back and played ball! Well the wait is almost over!! The 👑 is BACK! @JCrossover 🫡! #ThekidfromAKRON🤴🏾 https://t.co/6NWxlSQg9o

It was sad to see that poor management compromised the quality of this game. However, we can’t really blame the fans at Seattle. They have been out of basketball relevance ever since the Seattle supersonics became the Oklahoma City Thunder. That was after the 2007-2008 NBA season. Thus, it makes sense that the fans went overboard.

LeBron is entering Year 20 in the NBA. At that point in his career, playing in pro-am tournaments during the offseason speaks to what shape King James is in.