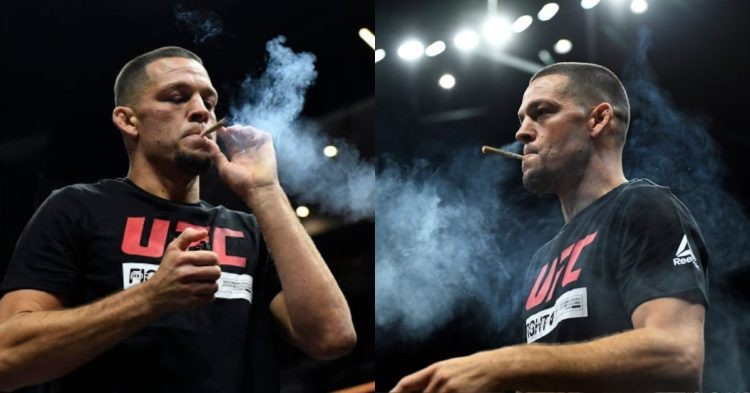 Nate Diaz is preparing for his supposed last UFC fight against Khamzat Chimaev at UFC 279. As fans know, Diaz does not gel well with authority, it was once again evident recently. The United States Anti-Doping Agency (USADA) visited Diaz’s residence to collect a urine sample and Nate took the opportunity to air his grief against the organisation.

He decided to record the footage of the USADA representative waiting around patiently for Nate to provide the sample. Nate was in the mood to have some fun and started smoking cannabis infront of the representative. Diaz even started blowing smoke toward the man whom Nate referred to as DK. However, nothing from Nate’s side was malicious and everyone in the room could be seen smiling.

Very recently, UFC middleweight fighter Paulo Costa was seen blasting USADA during the official weigh-ins. He accused the anti-doping agency of walking into his room and collecting blood while he was cutting weight. Needless to say, Costa was extremely unhappy about it. He repeatedly shouted “F**k USADA.”

Following the culmination of UFC 278, Dana stated that he apologized to Costa and reassured him that it will never occur again. White stated an action such as that can endanger a fighter’s life.

Being at odds with the anti-doping agency is nothing new for the Diaz brothers. Nate found himself mixed up in  a mishap from the USADA in 2019. Ahead of the BMF title fight against Jorge Masvidal at UFC 244, Nate Diaz took to Twitter and said that was going to withdraw from the event as USADA flagged him for testing positive for LGD-4033, or Ligandrol.

Your all on steroids not me pic.twitter.com/ykrZmRIoPS

However, the VP of UFC athlete health and performance, Jeff Novitzky clarified that the levels of the multivitamin were not high enough to give him any kind of boost in his performance. It allowed Diaz to perform at UFC 244. So Nate’s issue with USADA is completely understandable. But he is not the only Diaz brother to run into trouble with anti-doping.

Nate’s elder brother, Nick Diaz basically had his career on hold because of a 5-year ban by Nevada State Athletic Commission (NSAC). Diaz was suspended for failing marijuana tests and was fined $165,000. But it was later reduced to 18 months following an angry response from the fans. Following the original verdict in 2015, Nick did not fight for 6 years and came back in 2021.