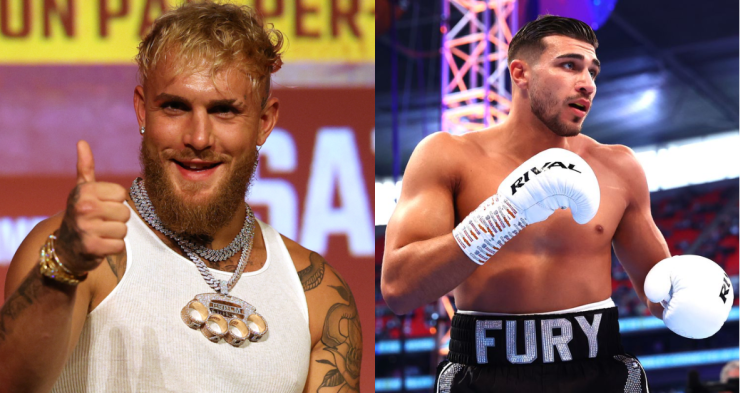 Floyd Mayweather Jr., took on YouTuber Deji in a boxing bout in the Middle East in an Exhibition outing. On the undercard of the fight, was another exhibition bout. It was one between two professional boxers namely Rolly Lambert, and Tommy Fury.

The highlight of that bout was the brother of the WBC Heavyweight Champion, Tommy Fury. Tommy Fury is the youngest brother of Tyson Fury and is a boxer himself. Moreoever, Fury was a contestant on the reality show Love Island, which catapulted him to fame.

We’ll go over what caused Fury, a boxer in his prime to have an exhibition and the chaos that ensued due to it. The cause of the chaos was no other than Tommy Fury’s long-term rival Jake Paul. Paul was there to provide color commentary, but it lead to something else entirely.

Tommy Fury was originally scheduled to fight Paul Bamba in a professional bout that was supposed to go on his record. However, due to Fury weighing 7 pounds heavier on weigh-in day, the opponent withdrew from fighting against him.

To save the bout from getting scrapped, a late replacement in Roland Lambert (15-2-0) was brought in and the bout was turned into an exhibition. Tommy Fury fought a tough fight and was unable to score a finish over Lambert. Fury was also being booed by the Saudi crowd while he was at it.

Jake Paul was on the commentator’s desk for entertainment purposes. Needless to say, Paul left no stone unturned to mock Tommy Fury. The pair were set to clash twice. Once at the end of last year, and once in the summer of this year, but the fight failed to materialize. Fury withdrew from the bout twice. He withdrew last year citing a rib fracture followed by illness.

This summer, it was reported that Fury was not able to come over to the US since his VISA was denied. Following his withdrawal, Hasim Rahman Jr. was supposed to fight against Paul. The bout was scrapped yet again due to weight issues between the camps. The chaos ultimately led to Paul fighting Anderson Silva.

Jake Paul shouting “you f***ing suck” and “you have no dick” to Tommy Fury while on commentary at ringside for his exhibition fight vs Rolly Lambert.

Paul was seen consistently mocking Tommy Fury, and hurling abuses at the latter. He also intended to humiliate Fury by calling him an amateur. Tommy Fury comes from a long lineage of bare-knuckle boxers, so it can be assumed that the term would be disrespectful to Fury.

He was caught on camera shouting cuss words and hurling words of abuse toward Fury from the commentator’s desk. Not only was Paul hurling abuses at Fury, but he was also seen dozing off trying to convey that the fight was a ‘snooze fest’ or a boring fight. Boxing fans agreed with Jake Paul on this front, as they gave their opinions through Twitter.

thid tommy fury fight is so boring, the most entertaining thing rn is jake paul taking smack on the commentary💀🤣

Tommy Fury needs to stop mentioning Tyson because this fight is boring me to death. Dragging the fury name in to the mud

The pair is yet to meet in the ring. With the speculations of Jake Paul fighting Andrew Tate, it is uncertain if it happens next.

However, considering the generation of publicity by both the fighters using each other’s names, the bout can be expected to take place eventually. If it does take place, it would be Jake Paul’s first fight with a boxing specialist. Tommy Fury would be the best opponent for him to start with since both are quite similar in experience.