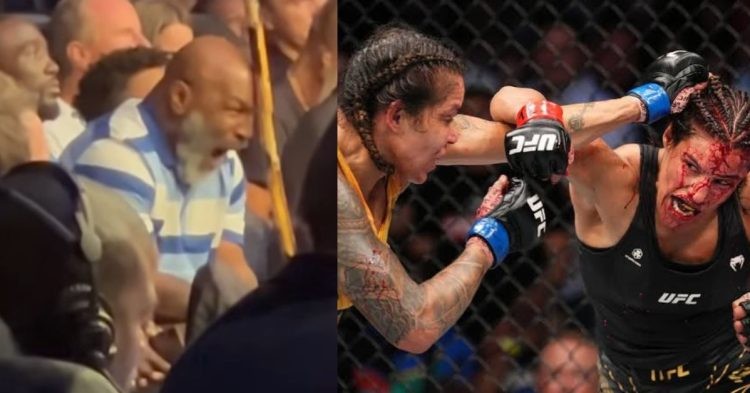 The highly anticipated UFC 277: Pena vs Nunes 2 featured many exciting matchups and most of the fights delivered to the expectations of the fight fans. Amanda Nunes brutally battered Julianna Pena in a wild main event fight that went to the distance from the highly controversial stoppage loss of Derrick Lewis, this PPV was filled with everything.

Consequently, to witness this spectacle live, the American Airlines Center in Dallas, Texas was packed as 19,422 fans were in attendance. There were several celebrities, UFC fighters and popular athletes from different sports present in the arena to watch this big PPV.

Amongst the many big names present, Mike Tyson made an appearance alongside current welterweight champion Terence Crawford. It was a great PPV in terms of entertainment as fans and experts gave a positive response to how the fights played out.

However, unlike, many fans who looked excited and were enjoying their time during the UFC 277 PPV, Iron Mike, on the other hand, fell asleep while watching one of the fights. A clip of him yawning surfaced online and has made the headlines.

Although this is not the first time that Mike Tyson has slept during an event as pictures of him yawning during an AEW PPV also made the rounds on Twitter.

Under the lefthookclub’s Instagram post of Mike Tyson sleeping during the UFC 277 PPV, fans had some hilarious reactions. So let’s take a look at some of the funniest comments made by fans.

A fight enthusiast named Dillen commented “Was a war scream“, meanwhile, many fans trolled Iron Mike by saying that the edibles were kicking in and he is on another planet after observing his eyes in the clip. It is needless to say that fans on social media took this moment light-heartedly and didn’t post any negative moments.

Do let us know below in the comments section your thoughts about how the UFC 277 PPV was in comparison of the previous pay per views and fight night events.