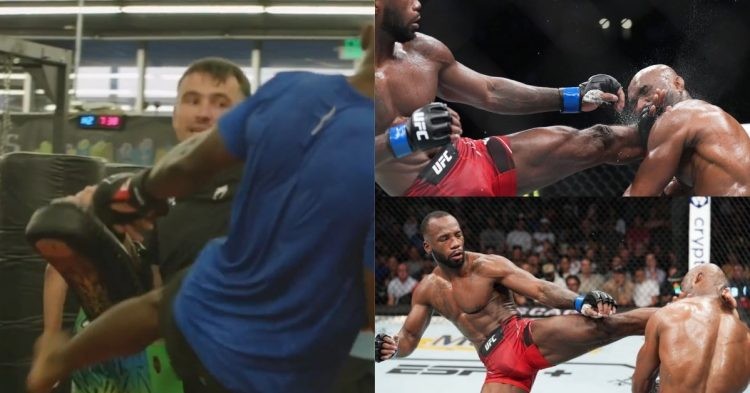 It is safe to say that Leon Edwards pulled off one of the best come-back wins at UFC 278. He fought Kamaru Usman in the main event of the PPV and was not having as much success as he would have liked. Despite Leon dominating the first round, Usman had major success in the following three rounds.

By the time the 5th round rolled around, Edwards desperately needed a finish to win the fight. But Usman was too good for Leon and he was winning the round handily in the first 4 minutes. With only a minute to go, Leon became desperate and landed a massive head kick which put Usman down on the mats.

Although the win was spectacular and Leon became the champ, some fans floated the idea that Rocky was lucky that he landed the kick. According to some section of the fan base, with only 55 seconds to go, it was a hail mary attempt from Leon to throw the kick. But it seems like that is not the case at all!

Recently, BT Sport released a video on their YouTube channel which showed the footage of Leon practising the kick with his coaches. The coaches seemed to identify Usman’s tendency to tilt his head during the fight camp and worked on it. It certainly paid off as that exact flaw in Usman’s game gave Leon the UFC title.

How did Leon Edwards set up the head kick on Kamaru Usman at UFC 278?

As mentioned previously, there were only a handful of seconds left in the bout. Hence, Leon was trying everything in his power to find an opening in Usman’s defence. That is where his training came in handy. Throughout the duration of the fight, Leon did not really have success on his feet. Despite being the better striker, he was failing to implement his game plan.

Following his success in the first round, Leon seemed to get into a shell and could not open up inside the Octagon. His coaches deserve a lot of credit as they did their best to motivate Leon between the rounds. Before the final round, one of his coaches, Dave Lovell asked Leon to take the matter into his own hands instead of feeling sorry.

They even directed Leon to land the head kick just moments before the finishing sequence. Leon faked a punch which made Leon tilt his head and it opened up the opportunity for the British fighter to land the kick. The rest is history!