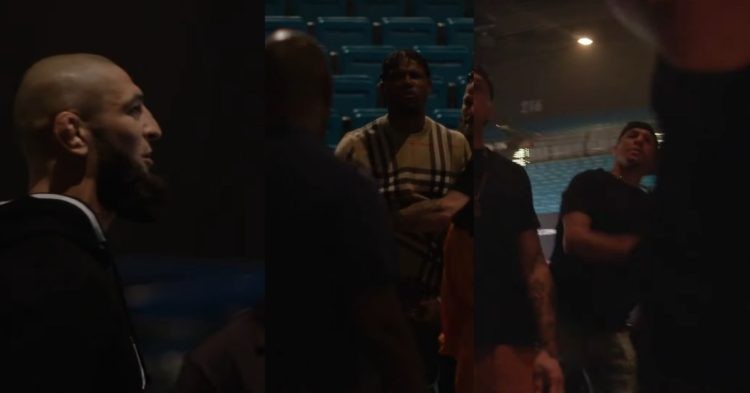 UFC has finally released a slight glimpse of the much-talked-about brawl between Khamzat Chimaev, Kevin Holland and Nate Diaz. The company released a new promo for the event altogether to explain why the previously advertised fights will not be taking place after all. It did a very good job of giving the fans a behind-the-scenes look into what really happened.

Reports came out ahead of the UFC 279 press conference that there was a big backstage altercation between three parties. Initially, Khamzat and Kevin got into a confrontation which turned physical real quick. However, it was reportedly broken up by Tiki Ghosn relatively quickly.

The second dust-up occurred when Diaz came in and saw Tiki with The Borz. It was reported that some bottles were thrown backstage between Chimaev’s team and Nate’s team. There was also brief footage of Nate throwing a water bottle which basically confirms all the rumours.

Because of all the chaos backstage, UFC decided not to proceed with the press conference. Dana White addressed the media afterwards and stated that a lack of security was a big reason why things got out of hand.

When Dana White was speaking to the press, he was asked whether there will be any footage of the brawl to promote the event or not. Although Dana refused to confirm it, the fans really hoped to witness the incident for themselves. Sure enough, UFC used it in their promo material for the PPV.

The company has a history of using controversial moments as its promotional material. The biggest example of it came in 2018 when they used the footage of Conor McGregor chucking a dolly on the bus which had Khabib Nurmagomedov in it. Although they were criticized for the move at the time, it remains one of the most infamous incidents in UFC history.

UFC 279 has had a very unconventional build-up to it. None of the originally advertised marquee bouts will take place as the opponents have been shuffled around. During the weigh-ins, Khamzat’s weight miss by 7.5lbs threw every plan out of the window. Instead of fighting Nate, Chimaev will get the chance to settle his beef with Kevin Holland in the co-main event of the night.

As for the main event, Nate Diaz will be fighting Tony Ferguson in a 5 round bout. Tony’s original opponent Li Jingliang will be taking on Daniel Rodriguez, who was set to fight Kevin Holland.