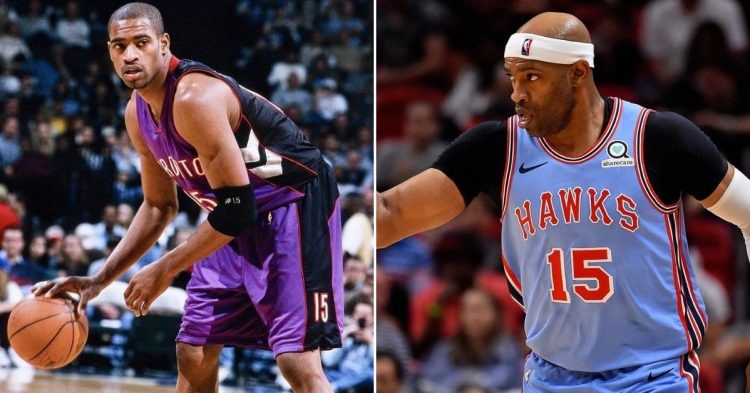 There would not be an NBA fan who hasn’t heard of Vince Carter. The former NBA star holds the record for most seasons played in the league. Speaking of how long Vince has been in the NBA, it reminds us of the iconic meme he’s known for: “I got one more in me.”

Vince Carter just announced on The Jump that this upcoming year will be his final year playing in the NBA pic.twitter.com/XFQGFJ14WK

For those who don’t know, it all started when he announced that he would the 2019-20 NBA season would be his final in the league. He said the iconic words on ESPN’s ‘The Jump.’ The NBA world did not expect Vinsanity to let everyone know that he has one year left in the tank in such a way.

One last flight for No. 15 pic.twitter.com/uFWxbntGiR

His words became a hit with fans instantly, as many began to use them under different circumstances. It only spoke at length about the impact he had on the league.

Vince Carter has played a record 22 seasons in NBA

The Golden State Warriors drafted him at #5 in the 1998 NBA Draft and then traded him to the Toronto Raptors right away. From 1998 to 2004 (the longest he spent at any franchise), Carter stayed in Toronto, before moving to the New Jersey Nets. The other teams he played for include are; Orlando Magic, Phoenix Suns, Dallas Mavericks, Memphis Grizzlies, Sacramento Kings, and finally the Atlanta Hawks.

When Air Canada announced that he’d play for one final season, he was with the Hawks. He retired in 2020, after that season. To put it into perspective, Carter played in the NBA for 22 seasons. The only active player who comes close to that is LeBron James, who is in his 20th year in the league.

Despite being in the NBA for so long, Carter never managed to win the title. Unfortunately for him, he couldn’t put an NBA championship ring on his finger even after playing 1,629 games in the league including playoffs. During this period, he averaged 16.8 points, 4.3 rebounds, and 3.1 assists.

Despite this, he boasts 8 All-Star appearances, a Rookie Of The Year award (1999), NBA Slam Dunk Contest champion award (2000) among many other honorable accolades.

Carter might not have been on the same level as the greats, including Kobe Bryant, Michael Jordan, or LeBron James. But the way he gave everything on the court earned him millions of fans, especially during his prime from 2000 to 2004. To this day, Vince Carter is arguably the best dunker in NBA history.