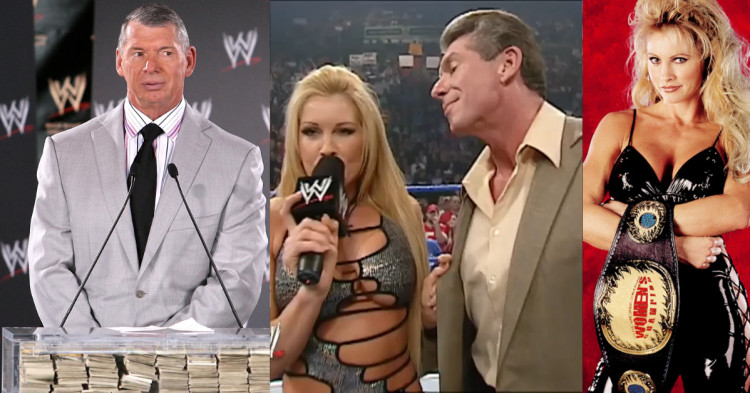 Vince McMahon has maintained a low profile because investigations into his alleged payments of “hush money” to former female employees are still ongoing. But back in the early 2000s, things were different. About two months have passed since former wrestler Vince McMahon resigned from his position as CEO and Chairman of WWE.

According to 2 Cold Scorpio, McMahon once made a public statement that he would engage in sexual activity with Sable, who at the time was involved in a public relationship with Marc Mero. At a virtual signing for Golden Ring Collectibles, Scorpio shared the following account: “Sable walks by and she’s got on this beautiful red dress, sh*t looked damn near see-through and this time, she’s still married to Marc Mero at the time and sh*t and I’ll never forget this, she walks by and Vince goes, ‘Damn.’ “Watches her as all of us did and he says out loud — I don’t know if he meant to say it to himself, but he said, ‘Damn! I’ma f*ck that b*tch. I don’t know when I don’t know where.”

Vince McMahon has been charged with forcing one woman (a real in-ring talent) to engage in oral sex and is believed to have paid a fortune to other female colleagues to keep their extramarital affairs a secret.

Vince McMahon, the ex-chairman and CEO of WWE, is still surrounded by scandal. Reports that McMahon had a sexual relationship with a former female WWE employee surfaced in the past month. He reportedly gave the employee a sizable sum of money and even signed a non – disclosure agreement. However, when it was discovered that there may be more of these incidents, things became vaguer.

According to a Wall Street Journal story, Vince agreed to pay up to $12 million to four women affiliated with WWE in return for their silence on his sexual misconduct. One of these four women had previously wrestled in WWE. Vince McMahon pressured her into an oral sex encounter in exchange for him agreeing to sign a $7.5 million contract with her.

WWE's Vince McMahon paid out $12 million in settlements to suppress allegations of sexual misconduct and infidelity over the past 16 years, people familiar say https://t.co/6HHLPmtIxX

Vince McMahon was forced to resign as CEO as the probe began and the reports of sexual misconduct spread. He stated in a formal statement, “I have pledged my complete cooperation to the investigation by the special committee, and I will do everything possible to support the investigation.”