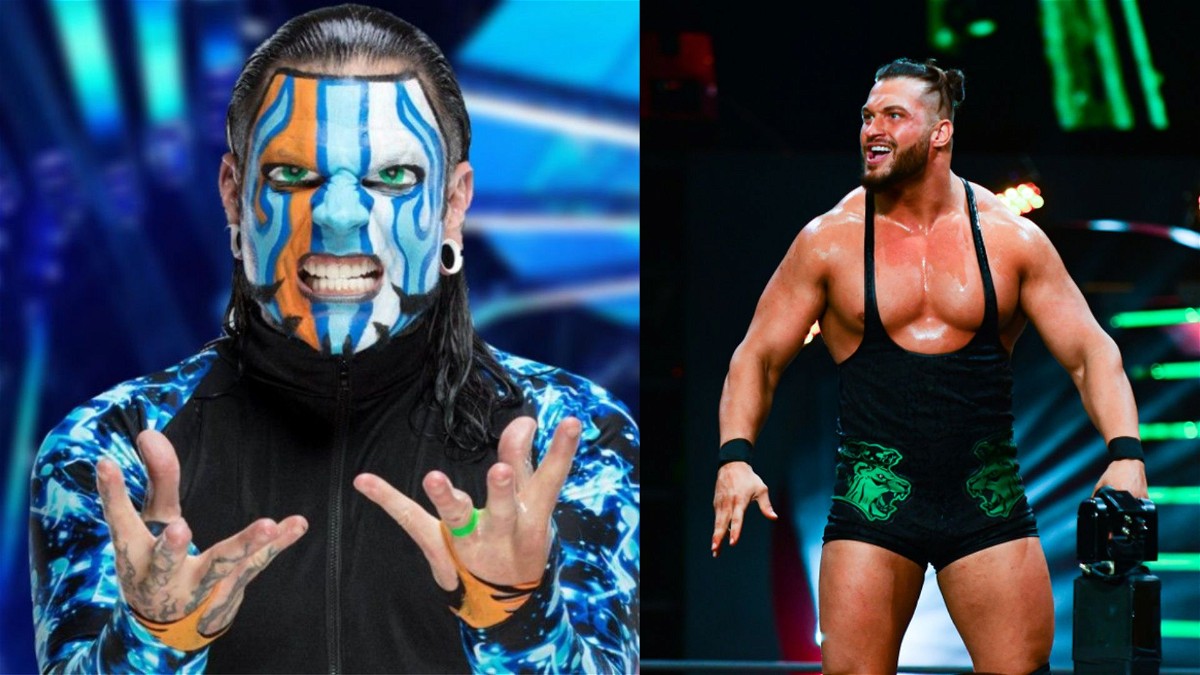 Wardlow with Jeff Hardy in AEW

These days we can’t get through a Dynamite or a Rampage without watching Wardlow conduct his vicious Powerbomb Symphony. Mr. Mayhem is one of AEW’s fastest-rising prospects, and already has the crowd dancing at his fingertips. While it’s only a matter of time before he eventually dumps his douchey Long Island-bred boss, it’s interesting to imagine what Wardlow would do next. For him, it would be teaming up with Matt & Jeff Hardy in an All Elite Wrestling ring.

Wardlow has been kept strong since he debuted in 2019

The Wardog debuted with the promotion on the  November 13 episode of AEW Dynamite, attacking Cody Rhodes; as was the norm at the time. He would align himself with Rhodes’ bitter nemesis MJF, becoming his enforcer and personal muscle. He took on Cody Rhodes in AEW’s first Steel Cage Match and although he came up short, Wardlow showed just how big of a potential draw he is.

Mr. Mayhem’s tenure with as MJF’s bodyguard has earned him Pay-Per-View main events and the chance to rub shoulders with some of the best professional wrestlers in the world.

Wardlow has only soared in popularity ever since CM Punk came into MJF’s life, and gave the Second City Saint a beating unlike we’ve ever seen him endure. His match with Brock Lesnar was more evenly-balanced than the encounter he had with Wardlow. And now that he is on the cusp of turning face, he has an intriguing idea for a stable.

Wardlow wants to team with The Hardy Boyz as a babyface

Speaking to the Battleground Podcast, Wardlow was discussing his childhood heroes and the people who inspired him to become a professional wrestler. He listed off a bunch of names ranging from technical wizards like Bret Hart & Mr. Perfect to superstars who put on a spectacle; like Dave Bautista and Brock Lesnar. Interestingly though, his favorite wrestler of all-time is Jeff Hardy. When asked about how he would feel if Hardy came into AEW, Wardlow said,

“Just sharing a locker room with Jeff Hardy would mean the world to me. To be involved in any type of match with him would be amazing. I personally would rather team with Matt and Jeff to take on three others, rather than wrestle Jeff myself.” – Courtesy: Battleground Podcast

It looks like he might get his wish sooner than later, as The Hardy Boyz are gearing up for a reunion tour, One Last Time. Wardlow is on the brink of having a Stone Cold Steve Austin-level breakout moment. When he finally turns of MJF’s Burberry-riddled behind, it will be a glorious day and we shall all rejoice. And hey, if Tony Khan listens to him, we might just get Wardlow wrecking shop alongside the Hardy Boyz on Dynamite as early as next month.
Tags: AEWJeff HardyWardlowWWE
Previous Post