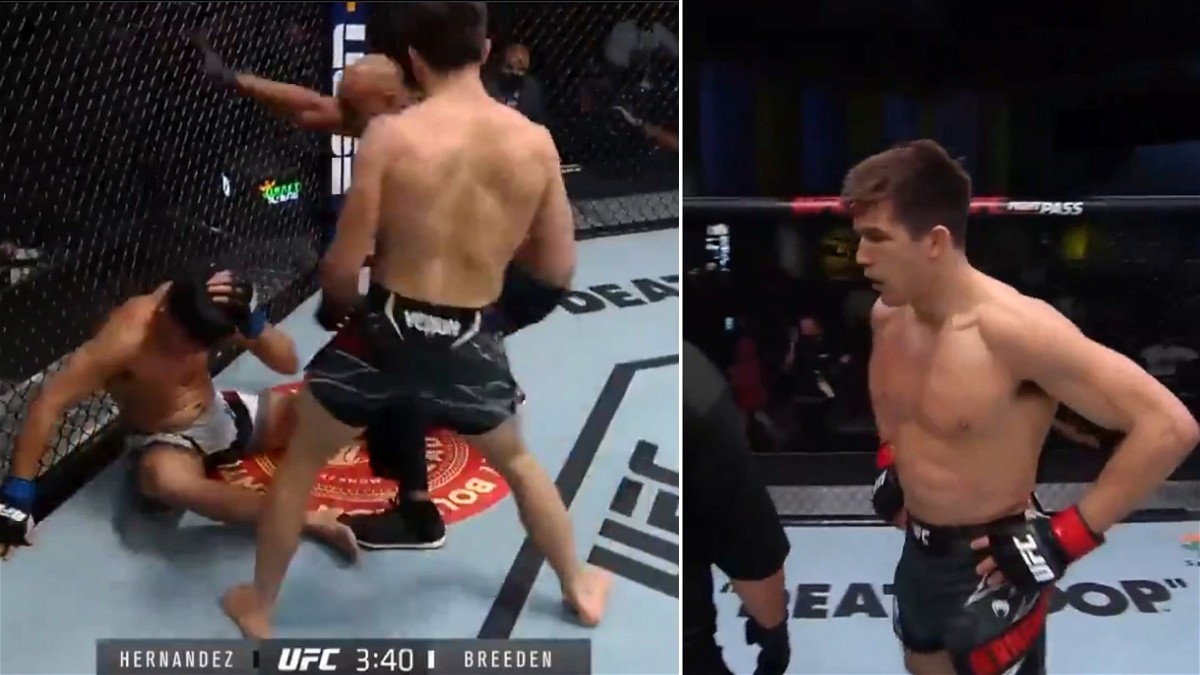 Alexander Hernandez kicks off UFC Vegas 38 with a stunning first-round knockout as he stopped Mike Breeden inside UFC APEX in Las Vegas. Hernandez has always been looked upon as one of the brightest prospects in the division. However, a row of recent losses has put a question mark on his possible future in the UFC. Needless to say, with this victory, Hernandez can once again start his climb back to the top-10 of the lightweight rankings.

“Winning is hard, performing is hard. You need to feel good inside when you are in that moment.” Hernandez said in the post-fight interview.

Alexander Hernandez entered the fight with a hefty 2-inch reach advantage. As expected, Hernandez came aggressive blazing in the first round. He showed great footwork and attempted to mix things up. While Breeden showed great takedown defense, stopping each of Hernandez’s attempts, he was not able to keep up with the pace of Hernandez, eventually getting caught with a vicious right, that left him on wobbly feet.

WALK OFF WITH THE RIGHT CROSS! ????@TheGreat155 put that man down WITH AUTHORITY! #UFCVegas38 pic.twitter.com/VhHYh51fAr

It was only a matter of time before a flurry of shots from Hernandez left Breeden stunned and on the canvas as the referee stepped in to stop the fight. With this victory, Hernandez is now back to the winning column. Hernandez is 2-2 in his last four fights, with his last loss coming against Thiago Moises back in February of this year. Hernandez might look to step inside the Octagon once again this year with a quick stoppage win here at UFC Vegas 37.

What’s next for Alexander Hernandez?

Arman Tsaruykyan could be the possible next opponent for Alexander Hernandez. Tsarukyan looked incredible in his last fight and could look to make a quick turnaround as well. Tsarukyan is placed at #13 in the UFC’s lightweight rankings, while Hernandez is currently unranked. Other options include Bobby Green, who looked incredible in his last fight against Rafael Fiziev.

Hernandez comes inside the cage with a great wrestling background and incredible power in his hands. He is extremely explosive and likes to put on a show whenever he steps inside the Octagon. If Hernandez is able to keep putting up performances as he did at UFC Vegas 38, there’s every reason to believe that Alexander Hernandez could give even the elites a run for their money.