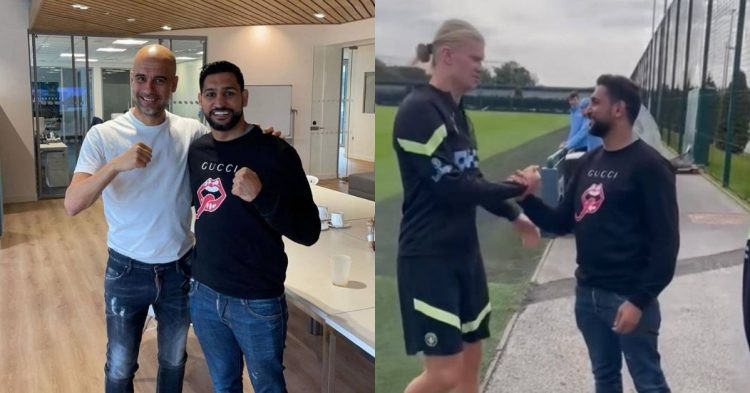 Manchester City are currently second in the Premier League table, and are just a point away from league leaders Arsenal. After the Gunners’ win against Liverpool, they took the top spot back from The Citizens. However, Pep Guardiola‘s men are the only ones to still be undefeated this season. They will look to continue on this form and to take over the league, with Erling Haaland leading the line.

Amid this, Man City players have recently welcomed a new face on their training ground ahead of their Champions League match against Copenhagen on matchday 4. It was none other than former boxing champion and the now-retired Amir Khan.

On his Twitter page, Khan said, “Thank you [ManCity] for inviting me to your training ground. Had a lovely time meeting manager/players and watching them train.”

Thank you @ManCity for inviting me to your training ground. Had a lovely time meeting manager/players and watching them train. @PepTeam @IlkayGuendogan @Mahrez22 pic.twitter.com/XDBKkEja0P

In the post, Amir posted a video of him “taking a swing” at the Man City manager, Pep Guardiola. It seems like the pair had a fun and hilarious exchange and laughed it off as Pep was pretending to push Khan over. In addition to that, the 35-year-old also clicked images with Ilkay Gundogan, Riyad Mahrez, and Rodri. He also shook hands with Erling Haaland as the latter towered over Khan.

The boxer from Bolton has recently retired from the sport, ending a 17-year career throughout which he won multiple championships. In May this year, Khan chose to hang up his gloves after the defeat to Kell Brook. He said at the time, “I think after the fight, I could feel that the love for the sport was not there anymore. And I then decided that I’m going to call it a day…”

As for City, they have enjoyed a decent season so far. But knowing what Pep demands from his players, it will be safe for us to assume that they will be looking to wrap up the league early like they have done in recent seasons. They certainly do have the players for it, including star man Haaland. The Norwegian has had an electric start to the season, scoring multiple hat-tricks and reaching another milestone.