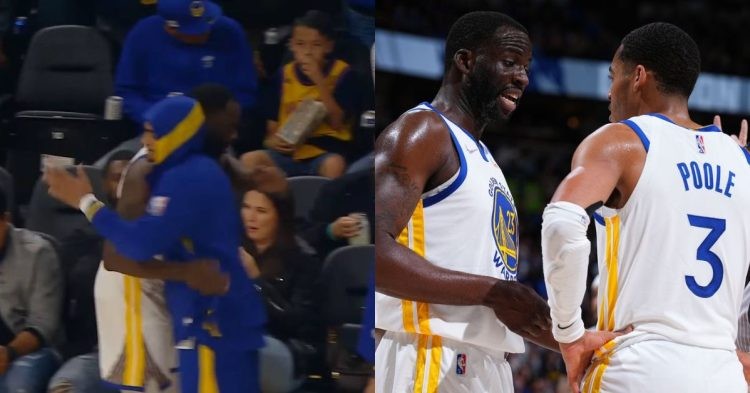 The incident between Draymond Green and Jordan Poole has been on everyone’s lips for a while now. If we’re being honest, no one expected Green to sucker punch Poole in the face during practice. To make matters worse for the Golden State Warriors board, an anonymous source even leaked the video of the fight.

Since then, there have been many reports of the pair not talking with each other anymore. Many rumors even mentioned that Green might be shown the way out by the GSW management. However, they only fined him for the incident after he admitted that he was in a “place of hurt”.

Many fans tried to find the reason why Green punched his teammate. NBA legend Shaquille O’Neal even claimed that Green might have done it to keep Poole in check after reports of the latter becoming arrogant in the GSW camp emerged. Moreover, many even drew parallels to the famous incident between Warriors head coach Steve Kerr and Michael Jordan as well. It is safe to say that the incident became quite famous.

During a press conference, Green apologized and mentioned, “Hurt people, hurt people. And I was in a very contentious space that morning of dealing with some things that is very near and dear to me. And I hurt someone because I was in a place of hurt. And for that, I’ve apologized and you know you apologize with words but ultimately your actions show your apologies.”

Will Draymond Green and Jordan Poole play for the Golden State Warriors together again?

The question of them being on the same team was on everyone’s minds in recent times. With the 2022-23 NBA season just around the corner, many thought the fight affected the team’s stability and balance. However, a recent interaction between the two players has put all those rumors to bed.

Before GSW’s preseason game against Nikola Jokic’s Denver Nuggets, Green showed his excitement to be playing in his first game since the fight. He was away from the team for about a week and Poole played in games as per normal. But Green had to take some time off to reflect on his actions.

Cameras captured Green as he was shaking the staff and players’ hands while he also dapped up Jordan Poole. This caught the attention of many as we all thought the pair hadn’t spoken to each other properly since their viral altercation. Poole may not be seen clearly on the video, but he was the first player wearing the hood that Green shook hands with.

Warriors fans will be glad to see that the pair are working their way back to having a good relationship as both Green and Poole are two of the most important players for the franchise.

“Kareem Has Also Criticized LeBron” – Shaquille O’Neal Sheds Details About His Sour Relationship With Kareem Abdul-Jabbar and Wilt Chamberlain, Backs LeBron James for His Recent Comments on the NBA Legend