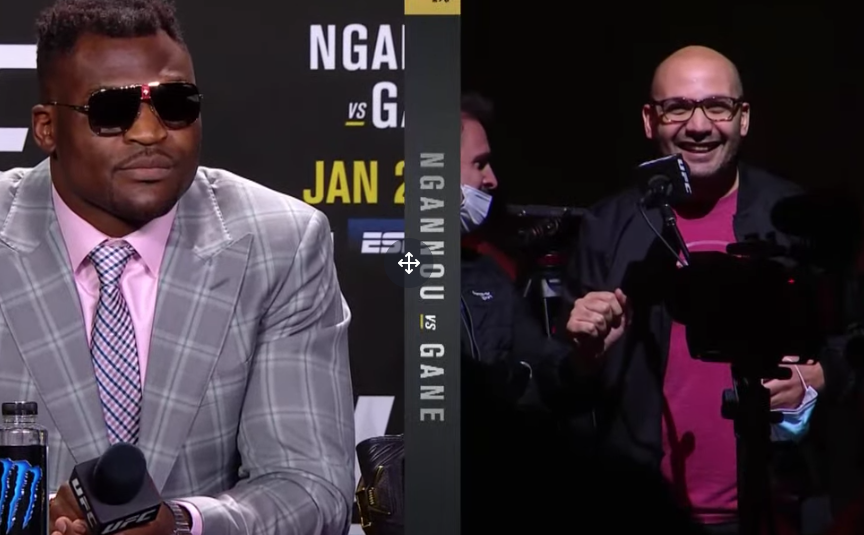 Francis Ngannou gets into a heated debate with a reporter during the pre-fight press conference ahead of highly anticipated UFC 270. The heavyweight champion was visibly angry as he called out the reporter for misquoting him. It all started after the reporter claimed that Ngannou called Ciryl Gane an “easy fight.” Ngannou was quick to react and denied making any such statements.

“Excuse me, Sir, where did you read that Ciryl was a very easy fight,” Ngannou asked the reporter as he reiterated his statement. “Did I say Ciryl is an easy fight? Did I ever say some fight is an easy fight?” The entire argument stems from the fact that Ngannou called Stipe Miocic the “toughest fight.” However, the heavyweight champion maintained, “Toughest! Tough than others. Meaning others are tough, but someone is the toughest. It’s not an easy fight my Man! If you ever fight in your life, you will know it’s not an easy fight.”

In the past, Ngannou has said that Stipe is tougher than Ciryl Gane, and he expects to knock out the French man come UFC 270. The comment was made regarding the toughness, and the ability to take the shots. Ngannou opined that it might require more than one punch to put Miocic to sleep, while the same won’t be the case with Ciryl Gane.

The UFC 270 presser had its moments with Francis Ngannou and Ciryl Gane also getting into a heated argument over Ngannou’s claims that he knocked Gane out during the sparring session. In what was a heated conversation between the both, Ngannou even went on to say that Gane was never his sparring partner.

Ciryl Gane might be the toughest fight for Francis Ngannou

While there’s no denying the toughness of Stipe Miocic, it won’t be wrong to say that Ciryl Gane might be the toughest fight for Francis Ngannou. For someone who relies heavily on his knockout power to win the fights, Gane comes across as an elusive heavyweight who continues to surprise fight fans around the world with his quick movements and his incredible striking.

Gane’s ability to keep himself off the harm’s way, and dictate the pace of the fight speaks about the experience he has garnered in such a short period of time. Needless to say, it will be interesting to see how the fight will play out when finally Francis Ngannou and Ciryl Gane square off inside the Octagon at UFC 270.