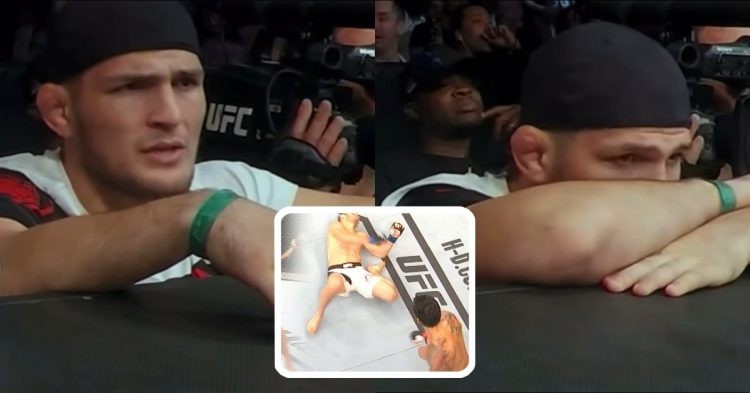 Khabib Nurmagomedov has swiftly transitioned into coaching since his retirement. Although there are many fighters whom he guides, Islam Makhachev remains his biggest project. Similar to him, Islam is also predominantly a wrestler and has an almost unblemished record.

Islam Makhachev has evolved a lot since joining the promotion in 2015. He has competed 12 times in the Octagon and has managed to win 11 times. His only UFC loss came against Adriano Martis at UFC 192. Islam shied away from using his world-class sambo skills during that fight and wanted to use his striking instead. But he soon found out that it was not the best strategy.

Adriano Martins landed a big right hook which knocked Makhachev down. It was basically the first big punch Martins landed and it stunned Islam. As soon as he dropped to the ground, Adriano followed up with some vicious punches and the referee did not have any choice but to stop the fight.

Khabib was shocked to see Islam Makhachev getting KO’ed

For that fight on October 5th 2015, Islam Makhachev’s head coach Javier Mendez, mentor Abdulmanap Nurmagomedov and his teammate and then active fighter Khabib Nurmagomedov, all of them were in his corner. UFC always records the corner reactions to the fights, hence Khabib’s disappointment was caught on camera. He could be seen asking Islam to settle down during the fight.

However, Khabib was shocked when Adriano cracked Islam with a big punch and dropped him. Although Nurmagomedov was hopeful for a second that Makhachev may recover, he soon came to terms with his emotions and put his head down as the referee waived off the fight. As someone who was thought to be the next big thing from Dagestan, it was obviously sad to see Makhachev perish.

Islam Makhachev remained unbeaten in his career following the loss and has not been troubled that much since then. He has 6 stoppages in his following 10 fights. Makhachev has also improved his striking as well. Against Davi Ramos at UFC 242, Islam showed how well-round he is and proceeded to have a striking battle. He even dropped Ramos in the final round and displayed impressive striking skills from the top.