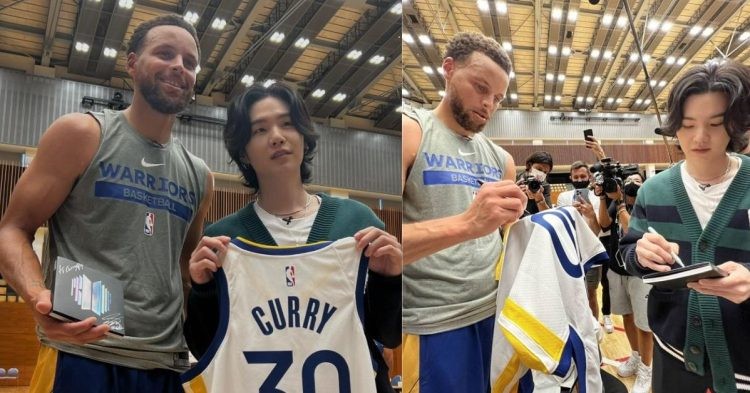 Stephen Curry is coming off perhaps one of the best years in his career. He led the Golden State Warriors to their 4th title this season. Moreover, he also broke and now holds the record for the most three-pointers ever made. Thus, the Golden Boy has been the center of attention this NBA offseason.

Not many NBA fans are familiar with BTS singers. This is Korean pop and a craze among younger generations. Several singers have emerged and become popular figures within a matter of months. “Suga” is the stage name of Min Yoon Gi. He is popularly known for his solo mixtape “Agust D“.

It would interest both NBA fans and Korean Pop fans to know both Steph and Suga meet recently. One must wonder how this interaction went down and what happened. Well, here is all you need to know about it.

We are already familiar with the tradition for NBA players to swap jerseys. This is usually done at the end of games and is considered a sign of respect. However, since Suga isn’t an NBA player, he chose to give Steph a copy of his album in return for a signed jersey.

This interaction made quite the rounds on social media as both personalities have a huge fan following. Curry is actually very popular in the Eastern half of the world and has gone there and participated in several exhibition games. After all, his ability to shoot the three has had many people attempting to replicate the same regardless of country.

Curry’s team is currently in Japan for their pre-season games against the Washington Wizards. #SUGAatNBAJapan | 🎥: Golden State Warriors/Twitter pic.twitter.com/i1pQhtagPf

The post got over 400,00 likes within a matter of a few hours on Instagram. Based on the video, they must have met during a workout by the 4x NBA champion. There were several fans present gaping at the two interacting. Steph looked much larger than the smaller Suga. That shows us how big NBA players are compared to an average person.

An honor meeting you SUGA!! Welcome to #DubNation pic.twitter.com/cmWEAQ3W4V

In any case, this has certainly done well for Stephen Curry and the Golden State Warriors fan base. It might not mean much in the grand scheme of things, but things like support and appreciation have a unique form of value and are useful.