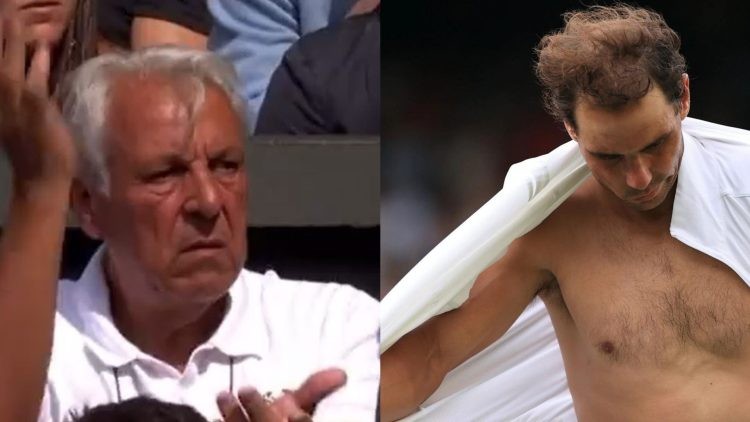 Rafael Nadal barely scraped off a victory in the Quarterfinals of Wimbledon against Taylor Fritz due to an underlying abdominal injury.

During the course of the match, it was spotted that he conveniently ignored the advice of his father, Sebastian and sister, Maria Isabel to retire from the match.

His family members were gesturing for Nadal to call it quits after he called the trainer for assistance during the second set. Nadal was quite evidently struggling from an abdominal injury which could possibly amount to an abdominal tear.

He was grimacing and shook his head in pain on the Centre Court which possibly made his family aware of his pain.

Rafael Nadal was later on spotted with a tape on his abs in his match against Taylor Fritz which debunked the claims of a lot of people who were stating that he faked the injury. He later on also went on to confess the fact that his family members had indeed asked him to take a retirement from the match.

It seemed as if his father was tapping his wrist to signal his son to call it quits on the match and his hopes to win the Wimbledon, he also later waved his arms in the air. This was in the presence of his sister Maria Isabel and his pregnant wife Maria Francisca who were watching the match tensely.

However, it was tough for Rafael Nadal to retire midway and he said that he wouldn’t have retired even if he knew that the match would go on for more than four hours. He used all his experience from previous such incidents in his career. He claimed that he hated doing this and all he did was kept trying.

Now it goes to see whether or not Rafael actually shows up to the semifinal match against Nick Kyrgios or just hands Nick a walkover win. The fans will also need to see the efficiency with which Nadal plays in the semis considering his injury and Nick’s run of good form in the tournament.