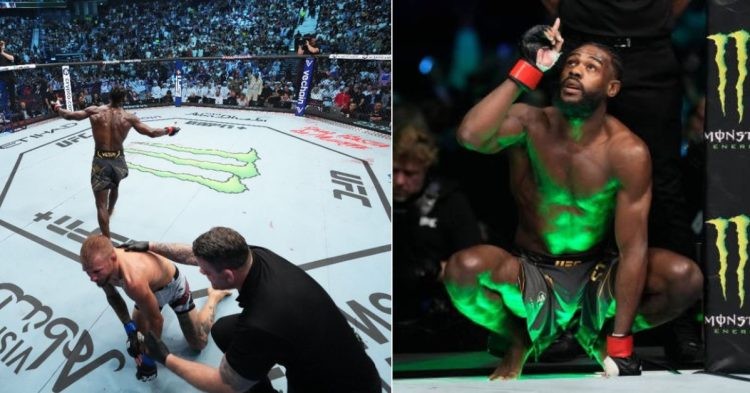 TJ Dillashaw suffered the first loss of his bantamweight career since the split decision loss to Dominick Cruz as he dropped a second-round TKO loss against Aljamain Sterling at UFC 280 for the bantamweight gold. In his attempt to become a three-time 145-pound champion, Dillashaw fell short, and how!

TJ Dillashaw dislocated his shoulder less than 20 seconds into the first round, as Sterling took the former champion down to unleash a barrage of punches. Many fans and fighters alike felt the fight should have been stopped way sooner, but as we had it, Dillashaw survived the first round, only to find himself in a similar position in the second round.

“I completely blew my shoulder out at the end of April,” Dillashaw said in the post-fight Octagon interview.

A series of answered shots as Sterling lay flat on Dillashaw and that was enough for the referee to stop the fight. Dillashaw revealed later that the shoulder snap was something he had been struggling with since April.

The former bantamweight champion apologized for holding up the division considering he was lingering with this injury since early this year.

TJ Dillashaw has spent more time on bottom in this fight so far than he has in his previous 17 UFC fights combined.

“Probably dislocated it a good 20 times throughout training camp,” Dillashaw said in the post-fight Octagon interview. He also revealed how he intimated to the referee before entering the cage to not stop the fight in case the shoulder popped out. That’s what happened as the first takedown attempt from Sterling popped Dillashaw’s shoulder out.

What’s next for TJ Dillashaw after the loss against Aljamain Sterling at UFC 280?

Inactivity has been a major issue for TJ Dillashaw. Coming off the two-year suspension against Cory Sandhagen, Dillashaw injured his knee in the very first round. He then went through knee surgery and was again out for over 400+ days.

Heading into the fight, once again Dillashaw found himself at the receiving end of an injury and one waits to see what’s next for the former bantamweight champion. It’s safe to say, there are some incredible options for Dillashaw in the form of Sean O’Malley, Chito Vera, and even a rematch against Cory Sandhagen.