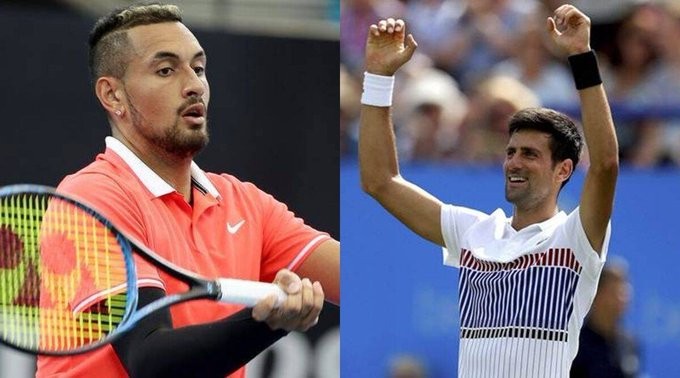 In a recent press conference, Nick Kyrgios said that he would not want to face Novak Djokovic if the Serb is allowed to play.

Kyrgios said he is very keen on avoiding being drawn to face a fired-up Novak Djokovic. In this case, if the reigning Australian Open champion manages to convince the Australian authorities to allow him to play at this year’s tournament in Melbourne.

Novak Djokovic can easily call the Australian Open as his, ‘happy slam’. He is the winner of nine Australian Open titles. Yet he is spending his third day in an immigration detention hotel after authorities revoked his visa.

Even though Nole’s visa has been previously supported by a medical exemption from the country’s vaccination requirements.

Nick Kyrgios has feuded with Djokovic in the past over his response to the coronavirus pandemic. Recently he has softened his stance and said that he was “feeling for him.”

Kyrgios, during the press conference called Australia’s treatment of the Serbian “really bad”. He also said that it was “not really humane, is it, what’s going on”.

Nick warned everyone that Novak Djokovic would be unstoppable at the Australian Open if he is cleared to play. He is predicting that the world no.1 would use his predicament to fuel the win for another Grand Slam title.

If Novak is allowed to play and wins the tournament then this would be his record-breaking 21st Grand Slam. He is currently tied with Rafael Nadal and Roger Federer at 20 Grand Slams.

Nick Kyrgios Does Not Want To Face Novak Djokovic

Nick said that he will be wary of Novak Djokovic, if he plays the tournament. “If he’s allowed to play the Australian Open, I don’t want any bar of him. I reckon he’s going to be pissed off.”

The Aussie was speaking to the press of the warm up tournament  in Sydney. He said, “he’s going to be very determined to play well, and stick it to everyone (because) of what’s going on. I think this is just all added fuel for him, in my opinion.”

Nick was singing praises for Novak Djokovic and said that the treatment of the tennis star in Australia has been “really bad.”

Novak Djokovic has found himself a very unlikely ally in Nick Kyrgios amidst the visa saga. ????#9WWOS #Tennis #AO2022 pic.twitter.com/bVXEdPThZV

He said, “We all know how good of a competitor he is, you don’t become a great champion like that without being able to overcome some adversity like this.”

Kyrgios said it was “not really humane, is it, what’s going on.”

“I think like it’s just, if this was a normal person they wouldn’t have to deal with all this. His life’s probably hard enough as it is, and I know what that’s like. I just hope it all gets sorted soon.”

The Aussie said that Novak Djokovic would also skyrocket Australia’ television ratings if he played in the Australian Open.

Kyrgios Spoke About His ‘Friendship’ With Novak Djokovic

In 2021, Nick dismissed  Djokovic as a “tool” after he issued a list of demands for quarantined players who arrived on charter flights for the Australian Open.

The Australian is claiming that their rift has been blown out of proportion. Yet he is not sure if he would reach out personally to Nole. “I don’t know if we’re on talking terms,” he said.

“But that’s the funny thing about me and Novak. We actually used to be friends. We used to practice at events and again, the media has divided us.”

“That was to shut them the f**k up”: Julius Randle Tries to Justify the Thumbs Down Gesture to Fans