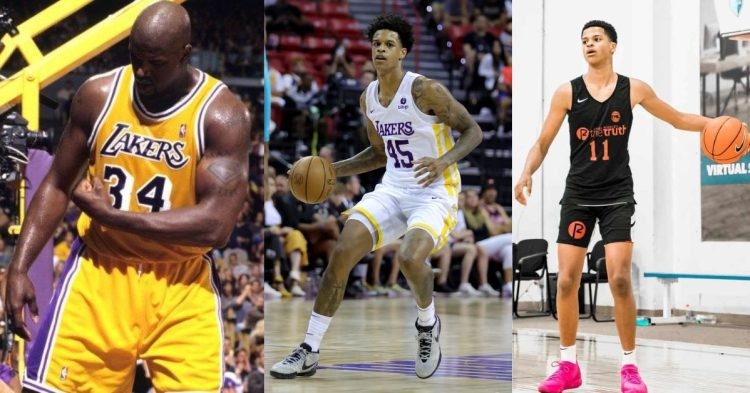 Almost every single NBA fan knows who Shaquille O’Neal is. He is considered one of the most dominant and unstoppable forces in the game of basketball. Shaq has won 4 NBA titles throughout his career and helped the Los Angeles Lakers three-peat around two decades ago. His son Shareef O’Neal garnered media attention by playing for the Lakers in the NBA summer league.

We all know how important genetics are and Shareef certainly has the background needed to be a future NBA star. However, his father revealed that he doesn’t want another NBA player in his family.

LeBron James has expressed a desire to play with his son. Additionally, there are several family members who have played in the NBA. From twins to brothers and even distant relatives, this is becoming quite common. Thus, one must wonder why O’Neal doesn’t want his children to experience the same thing.

The NBA legend was interviewed recently by “7NEWS Australia“. He discussed several trending issues in the NBA but was soon asked how he felt about his two sons and daughter all playing basketball. Shaq shared how he felt about this whole situation from the perspective of a parent and what advice he gives his children.

“I just tell them whatever you want to become, become it. They know that they have things to fall back on but I tell them it’s not going to be that easy. You know, to get my cheese you have to present me with two degrees. So I just keep them motivated and keep them happy and teach them about generational wealth right now. Like I tell them all the time, We don’t need another NBA player in the house”.

O’Neal went on to explain what he meant, “You wanna play I can help you get there but I would rather see a Doctor, Dentist, Veterinarian, World traveler, or Hedge fund guy or something.” This is a very mature stance to take as a human being. Despite our love for sports, the world does not revolve around basketball.

One can only imagine the pressure NBA players’ children face to become future players themselves. This is quite a burden to bear and Shaq’s balanced approach to his children’s futures should be commended.