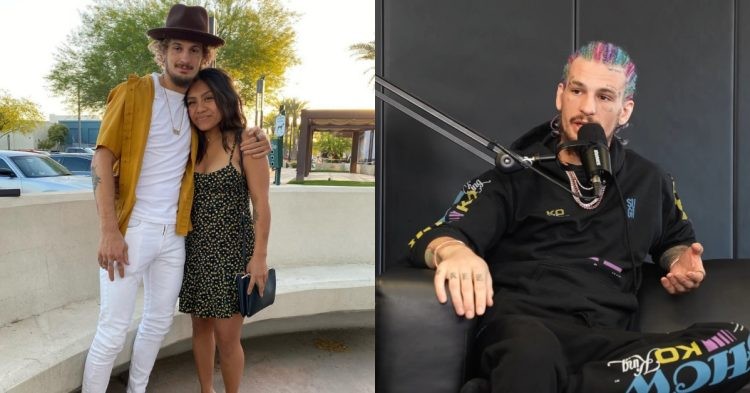 UFC bantamweight fighter Sean O’Malley has addressed the open relationship with his significant other. O’Malley is currently married to his long-time partner Danya. However, the nature of their marriage has been the subject of a lot of rumours lately.

Known for having a flamboyant personality, O’Malley is one of the brightest young prospects in the UFC. Not only has he impressed the fans inside the Octagon, but Sean’s antics outside the cage also caught the fans’ attention. Hence it is not surprising to see speculations about his love life either.

Despite being married to each other, Sean O’Malley and his wife have an Open relationship. Open relationships usually refer to having the freedom to see other people while being with someone else. That is exactly the case with Sugar Sean and his wife. Speaking about it on the Full Send Podcast, O’Malley said,

“Everyone has a different take on what an open relationship is. I’d like to think of ours as an open-minded relationship where we don’t own each other. I don’t own her and she doesn’t own me… She knew, she didn’t fall in love with a fake me. She knew who she was falling in love with. Cause I was myself.”

Whenever a couple is married, they usually engage in a monogamous relationship. But Sean’s philosophy on the issue is much compared to the conventional way. However, it has definitely worked for him and his partner.

Being a celebrity certainly has its perks, but constant attention can also be a stressful thing sometimes. While each has the right to have their own private life, celebrities usually do not get to have anonymity in their personal life. So is the case for Sean O’Malley.

His marriage has been a big subject of discussion among the fans following his conversation with the Nelk Boys. The comments section of the video was filled with people who wondered whether the couple was really happy with how things were going or not.

One person seemed worried about O’Malley’s wife. They questioned if Danya is truly okay with having an open marriage or if she has given her consent due to fears of the relationship coming to an end. The comment read,

“I can’t be the only one who gets the feeling that she really isn’t okay with it. She just puts up with it because she doesn’t want to lose him. No offense my boy, love what you do Suga”

While another fan questioned whether non-monogamy was truly superior to monogamous relationships or not. They wrote,

“Bro I swear everyone who is in an open relationship has to go into a philosophic explanation of why it’s better then a monogamous relationship besides saying that they just want to get with other people.”

Another user wrote that the 27-year-old should be single if he truly wants to see people other than his wife.

“Sean’s been hit in the head a few to many times if he thinks this is a mutual open relationship. He should be single if he wants to live like this.”

Sean O’Malley is set to return to the Octagon at UFC 276. The upcoming PPV on July 2nd will see him taking on Pedro Munhoz in the opening bout for the main card.