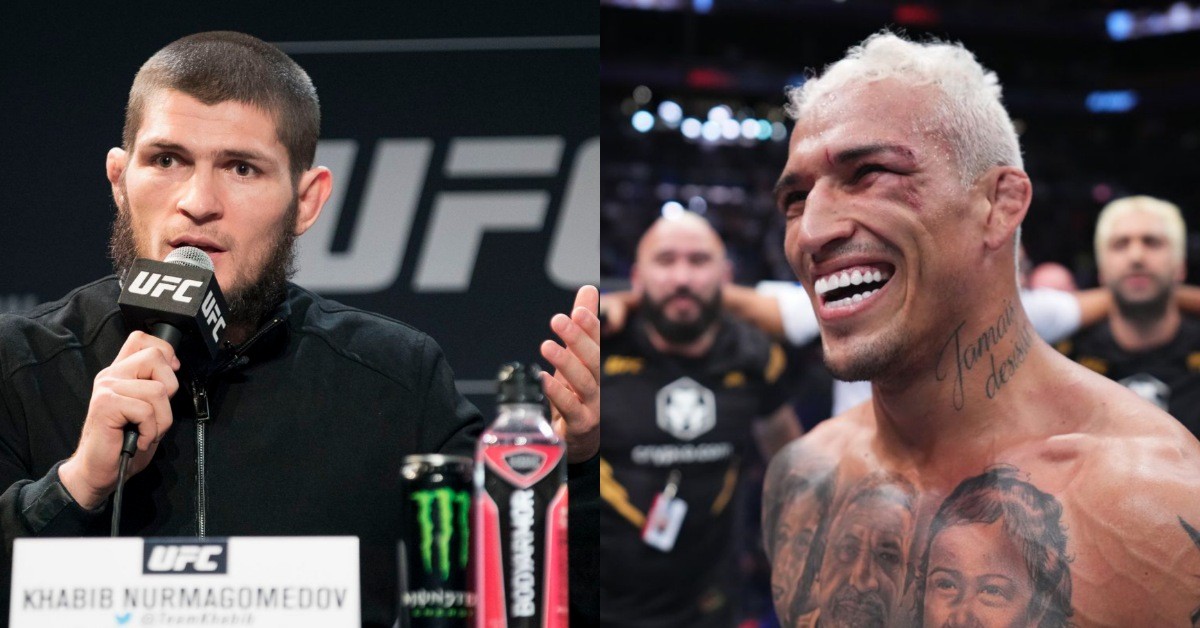 Khabib Nurmagomedov, known as the greatest UFC lightweight fighter, is gearing up for UFC 280. The event will feature his cousin Islam Makhachev in the main event, fighting for the vacant lightweight belt. Makhachev will be taking on Charles Oliveira who is ranked no. 1 in the UFC 155lbs division.

The Eagle previously called the bout a dream fight. He stated that it is equivalent to his fight against Tony Ferguson which never happened. Similar to that contest, nobody wants to make a proper prediction as to what may happen in this fight. Charles is an unpredictable fighter and never gives up easily.

Recently, some journalists caught up with Nurmagomedov and asked him about his thoughts on Oliveira. Khabib certainly had some interesting comments on Do Bronx. Recently, Justin Gaethje stated that Oliveira is the most powerful fighter that he has ever faced. However, Khabib did not agree with it. Instead, he is more concerned about Oliveira’s grappling.

“Oliveira has been around for a long time. When there’s someone on a good win streak in your weight division, you start seeing him as a potential opponent. Then you start thinking of what you need to do when you fight him. We studied him closely and we continue to study him. He’s got a very good guillotine. We have to watch out for it, his body is built for it.”

Khabib is confident about getting the job done on October 22nd. He wants Islam to focus on the game plan during the bout. Oliveira is a veteran fighter. So sticking to the drills in the practice sessions will be important for Makhachev.

“As for his stand up – really good knees and kicks, teeps to the body and head. I wouldn’t say he’s strong, but he’s gained a lot of experience and confidence in the last few years. We’re definitely not looking past him, but we’re confident we’ll get through him. We just need to be careful, patient and stick to the game plan.” (h/t via Khabib Nurmagomedov’s YouTube Channel)

As Khabib eluded to in the interview, both fighters are on great win streaks. While Islam is on a 10-fight win streak, Oliveira has remained unbeaten in the last 11 fights. So it just goes to show how confident both fighters will be heading into UFC 280.

Despite being the less experienced fighter, Islam is the favourite to win. Oliveira has not faced a fighter recently who is primarily a wrestler. Almost all of his last few opponents were strikers who used wrestling as last resort. But this time, Charles is going up against Makhachev who is the best wrestler in the division.

Although Oliveira has a great submission threat, he is a very technical grappler. But Makhachev, on the other hand, is both technically sound and possesses great power. Can Islam Makhachev use that to smother the Brazilian and get a win? The fans will get the answer at UFC 280.