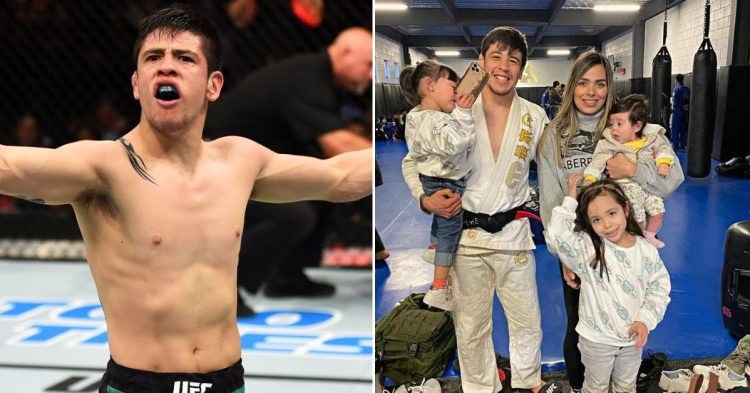 Brandon Moreno is married to his longtime girlfriend Shirley Moreno, and the couple has three adorable daughters. Maddie, Megan, and Morgan are the light of the Moreno family, and father Brandon Moreno couldn’t have been happier.

Brandon Moreno is a former UFC flyweight champion; the youngest ever from Mexico. While life is certainly incredible now after reaching new heights in his MMA journey, that wasn’t the case earlier.

Moreno is probably the nicest UFC fighter on the roster. He is a gentleman outside the Octagon, but a true Assassin inside the cage. Moreno has never failed to put up incredible performances inside the Octagon, and at such a young age, continues to carve his legacy in the world of mixed martial arts.

Brandon Moreno met Shirley Moreno when he was in high school. He did not have a job at the time and earned little to nothing. Needless to say, it was tough for the couple in the beginning as Moreno struggled to find his foot in the world of mixed martial arts.

“It’s a dream come true for her too. We started from the bottom, you know. I meet her when I had like nothing, I was in high school, I don’t have anything, like a real job or money or something like that. I am start to be better, and this is sport, and she was with me.” Moreno said in a conversation with Brendan Schaub.

Moreno recalls meeting Shirley back in 2011. It was the same year that he made his professional MMA debut and more than a decade later, the Mexican fighter is arguably one of the most popular fighters in mixed martial arts.

“I meet her in 2011.” Moreno says, “She born in Texas. She grow up in the border with Texas and Tamaulipas. She speaks Spanish ad everything, she speaks English and everything.”

While very little is known about their personal life, off-late, Moreno’s appearances with his wife have increased. Shirley Moreno was most recently seen in the latest episode of UFC Embedded ahead of UFC 277.

Brandon and Shirley can be seen cooking breakfast for their three adorable daughters, as they struggle to find unique ways to get them to eat vegetables.