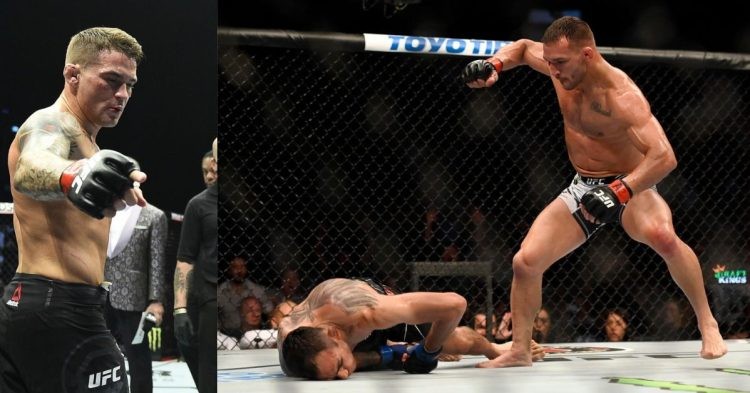 Dustin Poirier did not hold back as he slammed Michael Chandler for his comments and broke down exactly why the former title challenger is absolutely wrong to point the finger at him. The rivalry between Poirier and Chandler stems from their comments about each other in the past where Chandler had opined that Poirier was at the tail-end of his MMA career.

The comment from Chandler came in the wake of Poirier’s desire to fight Nate Diaz in the welterweight division. At the time, Poirier teased an epic showdown against Nate Diaz, hinting at a move to the 170-pound division following his second-round submission loss against Charles Oliveira for the lightweight gold.

Now, both Poirier and Chandler will look to settle their rivalry at UFC 281, where the duo will engage in a three-round fight on November 12 inside Madison Square Garden in New York.

Dustin Poirier reminds Michael Chandler that they are businessmen first

There is a good amount of history between Poirier and Chandler. In the past, Poirier had expressed his frustrations with the UFC after they awarded the title fight to Michael Chandler. At the time, Poirier had said Chandler needs to “earn” the title shot.

Poirier and Chandler got into a bit of a scuffle back at UFC 276, with Poirier screaming “you’re a fake mother*****” as both the fighters were separated in what could have led to a huge brawl.

There certainly seems to be a lot of heat heading into this fight, but the recent conversation between both the fighters suggests that we might not see all the drama and antics ahead of UFC 281.

It’s a competitive fight between two power punchers in the division. Poirier was last seen against Charles Oliveira in a losing effort, while Chandler is fresh off a KO win over Tony Ferguson. UFC 281 goes down on November 12 and will feature Israel Adesanya defending the middleweight gold against arch nemesis Alex Periera. In the co-main event, Carla Esparza will defend her strawweight gold against Weili Zhang.