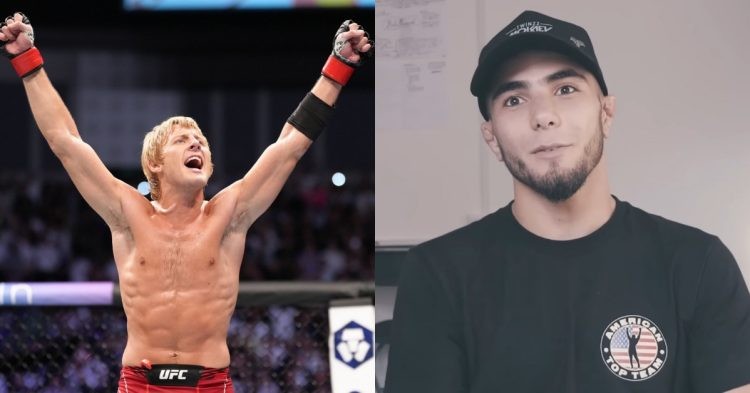 Muhammad Mokaev and Paddy Pimblett are amongst the brightest talents emerging from the UK. Both of them were recently featured at UFC London, where both won their respective fights. While Mokaev secured a record amount of takedowns (12) against Charles Johnson in the prelims, Pimblett submitted Jordan Leavitt on the main card.

It may come as a surprise to some, but Paddy Pimblett and Muhammad Mokaev do not like each other. Fans may wonder why the two are not on friendly terms. It all goes back to 2018 when they had an exchange on Twitter. The issue occurred when Mokaev picked up the England flag to celebrate. But it irked Paddy who made some comments about it.

The actual backstory behind why @muhammadmokaev dislikes Paddy Pimblett. pic.twitter.com/vjnYbvt2Tp

As the fans may know, Muhammad Mokaev was not born on UK soil. He came to Manchester from Dagestan, the home country of the former UFC champ Khabib Nurmagomedov. Hence, Paddy thought The Punisher should not be wearing the flag on his back. At the time, Mokaev did not hold British citizenship. But Mokaev did not take Paddy’s comments kindly and lashed out.

Mokaev got his citizenship on November 18, 2021. He posted the news on Twitter and added that he was proud to represent the country.

Although there was no interaction between the two for a number of years, it now seems like Muhammad Mokaev is gunning for a fight against Paddy Pimblett. Following their respective fights on July 23rd’s UFC fight night in London, Mokaev stated that he thinks a fight between him and The Baddy can take place in the 145lbs division of the UFC.

“I saw him at breakfast after the fight, The guy’s eyes, they don’t have the same energy like when he talks in a microphone. He doesn’t have the same energy. I would fight him at 145. If the UFC makes this fight, I will fight him at 145. I won’t cut any weight. People [might not] believe me, but I’ll do whatever I’d want to him.” (h/t via MMA FIGHTING)

While Mokaev currently fights in the flyweight division, Paddy Pimblett is a lightweight fighter. So the chances of the fight taking place are not very high. Mokaev is still in the prelims while Pimblett is well on his way to becoming one of the biggest stars in the company. Even Dana White compared his rise to the early days of Conor McGregor. So it shows that the company is fully behind the Liverpool native.

Mokaev still has a long way to go before he is in any position to call his shots. Although he is undefeated, Muhammad has only had 2 fights in the company. But there is no doubt that he has the potential to be the champion in the 125lbs division. Although he may not get the chance to fight Paddy straight away, things can be very different if he has a belt strapped around his waist.